Adidas is sort of profiting off of Kevin Ware’s injury

Before the start of the tournament, Adidas made “Rise To The Occasion” shirts for all of their major schools.  After Kevin Ware’s gruesome injury the Louisville players asked their coaches if they could get a shirt that was dedicated to Ware to wear prior to games.  It was initially thought that Louisville and Adidas were directly profiting off of the new “Ri5e To The Occasion” shirts, but apparently that is not true and Louisville declined royalties for the shirts.

Louisville sports information contacted CBSSports.com as well, and shared the following: “According to Associate Athletic Director Brent Seebohm, UofL proactively decided to waive any traditional university licensing royalties revenue connected to the #5 graphic to be worn by the team on court. The “Ri5e to the Occasion” shirt was created as a respectful tribute to honor Kevin within NCAA trademarked apparel parameters, and allow fans to rally around the team. Because of that, Adidas is contributing a portion of every sell to the University’s scholarship fund.”

“The ‘Ri5e to the Occasion’ T-shirt was created at the request of the team and university. We are happy to support Louisville fans who wish to honor a player and rally around the team during the most important moments of their season. The shirt was intended as a respectful tribute and because of that a portion of every sale will go to the university’s scholarship fund.”

This type of ordeal is going to be the exact type of thing that the Ed O’Bannon lawsuit against the NCAA and EA Sports will focus on.  Using a player’s number on jerseys and shirts that are clearly supposed to represent a specific player, yet, providing him with zero compensation for doing so.  While the gesture may be nice and some of the money may be going to the university’s scholarship fund, not all of it is.  This could be yet another blow to the NCAA’s defense in the lawsuit.

UPDATE: Apparently Adidas is no longer selling the shirt now 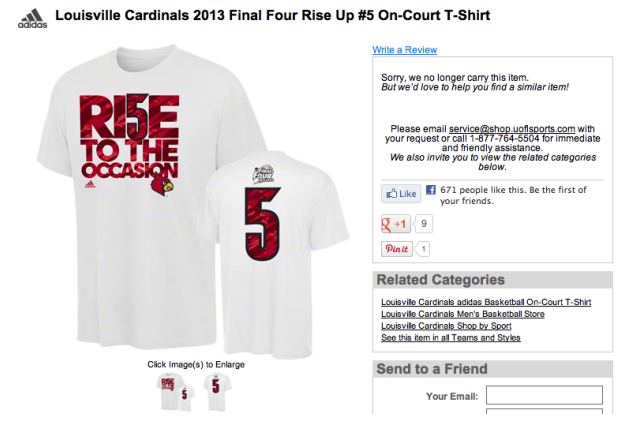