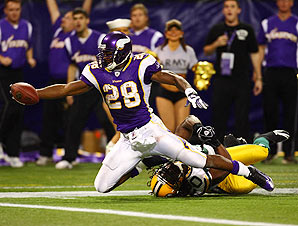 Key Losses:
Green Bay Packers have gone through the offseason not making a lot of moves. Quarterback Aaron Rodgers is a budding star and has options at wide reciever with Donald Driver and Greg Jennings, two very talented guys. Green Bay’s defense is going to be improved. Linebackers AJ Hawk, Nick Barnett and Clay Mathews are the most talented group of linebackers in the league. Mathews should record double digits in the 3-4 defense. Charles Woodson and Al Harris are two shut down cornerbacks that can make a big play on any moment. Green Bay has all the makings to win the division, especially if Favre does not return to the Vikings.
Prediction: 12-4, first in division 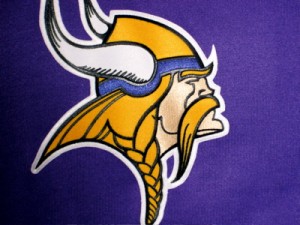 Key Additions: CB Lito Shepperd
Key Losses: QB Brett Favre? RB Chester Taylor
Minnesota Vikings need their quarterback back, Brett Favre, to play anther season to make another run. If Favre does not return, Minnesota will be stuck with no-good Tavaris Jackson.  The Vikings will still have a very talented group on offense. Adrian Peterson is either the best or second best running back in the league (Chris Johnson). Sidney Rice and Percy Harvin bring the big play ability to the wide receiver position. Minnesota’s defense is also stellar, led by the best defensive line Jarred Allen, Kevin Williams and Pat Williams. E.J. Henderson is a solid linebacker and cornerback Antione Winfield can shut down opposing teams best reciever.
Prediction without Favre: 9-7, second in division

Key Losses: LB Larry Foote, LB Ernie Sims,
The Detroit Lions have actually had a very productive offseason. Quarterback Mathew Stafford showed flashes of why he was drafted #1 overall. Calvin Johnson has the most potential at the wide reciever spot as anyone in the NFL he just needs to get the ball. The Lions drafted Cal’s running back Jahvid Best to be another home run threat along with Calvin Johnson. Best could possibly win the Offensive Rookie of the Year. Ndamakung Suh, if he can live up to his hype, will bring a threat on the defensive that has been missing. Suh is not the only good play, safety Loius Delmas is going to be great.  The Lions need production from the top guys as well as solid production from the lesser known guys.
Prediction: 7-9, third in division


Chicago Bears made the biggest news by signing the top available free agent, Julius Peppers to a 6 year $90 million dollar deal. Peppers is a man amongst boys and should help the team considerably. The Bears have question marks to be answered. First, who will Jay Cutlerthrow the ball too ? Johnny Knox is guy thats really stepped up last season as well as Devin Aromashodu. Devin Hester has the makings with his speed to take any play to the house. Chester Taylor will bring a solid #2 back behind Matt Forte. On deffense, Brian Urlacher will continue to lead the team. I really don’t know what to think about Chicago. At times they can seem like a very good football team. Others times though, they look worse than the Lions… is that possible?
Prediction: 6-10, fourth in division
In this article:Chicago Bears, Detroit Lions, Green Bay Packers, Minnesota Vikings, NFL, NFL Preview