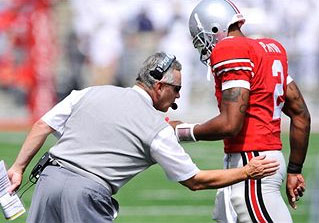 Going from starting at the Ohio State University to starter of a Canadian Football League team?  Actually seems fairly normal if you ask me. Its been reported that Terrelle Pryor is already in negotiation with the Saskatchewan Roughriders. Here’s what Pryor’s agent had to say.

Pryor’s attorney, Larry James, said Wednesday that the CFL is a genuine possibility for the 6-foot-6, 233-pounder.

“Yeah, it’s like I told (the Roughriders). My house is not for sale, but at the right price, it’s on the market,” James said.

James was in a meeting and had yet to speak with Pryor about the Roughriders, however. James said he did not believe Pryor had ever mentioned the CFL as a strong possibility in their conversations.

Pryor, a three-year starter for the Buckeyes, announced on Tuesday that he is giving up his senior season while the NCAA investigates Ohio State players getting improper benefits, including tattos, cash and possible sweetheart deals on cars. Pryor has admitted he broke NCAA rules by accepting improper benefits from a Columbus tattoo-parlor owner.  Source: Associated Press.