Truly a matchup of night and day. Michigan State will look to control the ball with a power attack and play strong defense, while the high-flying Ducks will do what they always do and try to score as quickly and as often as possible. Michigan State may have lost some key players on defense to the NFL, but Trae Waynes and Shilique Calhoun will be up to the task of trying to stop Heisman hopeful Marcus Mariota and stud running back Byron Marshall. 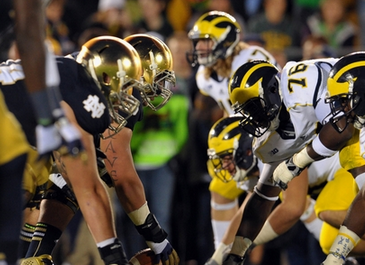 The last meeting between these two historical schools for the foreseeable future. It’s a true test for two programs coming off bad years, and the re-addition of Everett Golson as quarterback for Notre Dame is going to be huge. Michigan brings in a new offensive coordinator in Doug Nussmeier, who will look to revive the nearly-dead running attack. The shuffling at offensive line will likely cause major issues for Michigan this year and fans should expect some growing pains. That being said, this game is going to be a must-watch because we don’t know if or when this rivalry will ever play again.