I was 11 years old when my world was turned upside down by a sporting event. At that time, sports were becoming my primary reason for living.  My mom was thankful for that, because if not playing and watching every single sport, I would have driven her even more crazy.

Besides living in Ann Arbor, my introduction to Michigan sports came though my dad, who goes to every home basketball game and took me to many when I was a kid.  Michigan football had recently been crowned with a National Championship in 1997 and had been a power ever since. Watching Michigan football on Saturdays was a regular part of my routine. I could be civil watching a Michigan game at a friend’s house, but in my own house, I had to be alone. If anyone was in the room with me, I considered their presence the reason for any bad UM plays.  For example, a game would be going along just fine until my mom would come into the room and the other team would score a touchdown. That is when I would lose it, yell at her to get out, and say she just cost us a touchdown. She never seemed to understand what I meant. (FYI: I still may have that reaction today, but I bite my tongue because I now know she isn’t responsible for all the bad luck (jk)).

In any case, the date was November 3rd, 2001, and Michigan was ranked #6 in the nation. UM traveled up the road to East Lansing, which is a key factor in the resolution of the game. The MSU team had eventual Lions #2 pick, Charles Rogers, T.J. Duckett and Jeff Smoker. Michigan was aced by John Navvarre, Larry Foote, Chris Perry and Marquise Walker.

Michigan was up 17 to 14 at halftime and I was feeling pretty good after Michigan had driven 80 yards for the touchdown right before the half to take the lead. I felt good enough that I had my dad make me a sandwich with turkey. I think I even told him that things would be alright and I’d try not to yell at the TV anymore.

Things were getting a little intense going into the 4th with a tied score.  I felt my heart  in my shirt beginning to beat a little faster. Luckily, Michigan recovered a fumble and took the lead with six minutes to go, but things quickly went down hill after that. Michigan went three and out and was forced to punt with two and a half minutes remaining. With Hayden Epstein’s short 28 yard punt, I began screaming at the TV because of his awful miscue. MSU had the ball at Michigan’s 44 yard line needing a touchdown to win the game. A field goal would not have been sufficient.

I had long ago kicked everyone out of the TV room. Our house is laid out so that the kitchen is adjacent to the TV room and Zoe’s dog crate was in the kitchen under one of the counters. The dog was no where to be found, because she can’t stand to be around me when I’m screaming. MSU quickly began moving the ball and a costly pass interference penalty put them near the goal line. The time clock was becoming more and more important for the outcome of the game. MSU completed a fourth down play and was on the Michigan 3 yard line with 17 seconds remaining. I could hardly contain my anxiety as I watched two feet away from the TV. As a typical UM fan, after Ohio State, the team that we hate the most is Michigan State. It was incomprehensible that the game was coming down to these final seconds. I had no way of controlling myself.

There will always be controversy about what happened during those last seconds, but it seemed like the MSU clock timer fell ASLEEP. Meanwhile, I was NOT asleep but wide awake and very agitated. With time suspended, MSU was able to snap the ball and spike it with one second remaining. MSU had one final play to score a touchdown. Things actually looked good at the start of the play. Michigan had blitzing linemen in Smoker’s face. However, Smoker escapes and lofts a pass right into the middle of the end zone. At this point my heart had completely stopped and everything was moving in slow motion. The ball finds Duckett’s arms over the outstretched Michigan defender. This is the straw that breaks the camel back and begins the perfect storm.

Immediately, I shredded the Michigan the T-shirt I was wearing.  I’m shouting in every direction and looking for a place to take cover. My mom came downstairs to find out what was going on. She didn’t see me on the couch but hears me whimpering in Zoe’s crate. I had figured a way to shoe horn myself into her dog crate butt first and shut the door. At the time, my thinking was that this would be a safe place from the world that was crashing in around me. I could see Zoe looking at me with her head askew and probably thinking,” What is wrong with this boy and why is he in my bed?”  My dad, mom and sister all came down and looked at me in amazement. Zoe weighed around 12 pounds and I was 75 lbs. Things were a bit squishy, but I felt secure and safe in my own world.

This is the type of moment that you just don’t forget. My sister, who was an aspiring writer back then, decided to use this episode in one of her essays as the persona of her younger brother. I didn’t appreciate it back then, but I didn’t have a choice. This is who I am.

Today when I watch Michigan games, my mom is allowed to sit in the room (unless things go really bad). Michigan hasn’t been able to regain the status that they had during the late 90’s, however, we’re hopeful Hoke can lead them back to the glory land. Big Ten officials, after reviewing this Michigan vs. MSU game, created a rule that no team can use one of their employees as the official time keeper. This task is now assigned to a Big Ten official. It makes me wonder why all UM fans and my whole family (including the dog) had to suffer before they implemented this change. I suppose it was for me to learn a lesson.

We still have Zoe’s crate and I can smile now knowing that I can’t fit in it anymore and hopefully I have no need to get in it again.  That’s not to say I’m not passionate about watching sports, but hopefully I’m more mature. 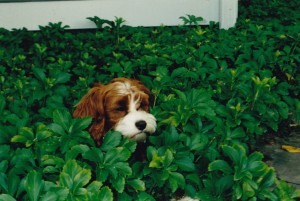 Zoe. She’s small enough to hide in the ground cover.