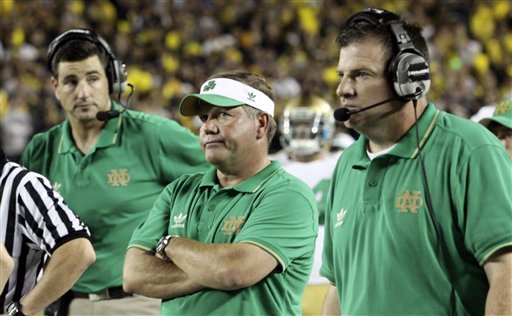 If you think back to last year, in which Denard Robinson marched the troops to a game winning touchdown drive in the waining seconds, this past weekend’s game was very similar. Of course, Michigan fans were the ones jumping with joy both times. However, the game this year seemed head and shoulder above last year’s. Certainly, if it weren’t for these crucial plays that went in Michigan’s favor, I wouldn’t be saying that and Notre Dame would have been the victorious ones.

Sometimes it’s better to be lucky than good. Michigan would have been in desperation mode had they not scored a touchdown here down 24 to 7. Denard, in the post game press conference, said that he had never scored a TD like this before. That should change, they need to start running this every game.

Tommy Rees had an outstanding game, outside of two interceptions and this fumble. Had Notre Dame scored any points here, I think the game would have been out of reach. This is the break that led to Michigan driving the ball and getting themselves right back in it.

Michigan’s defense showed up in the second half of the game and made big stops on two crucial 3rd and shorts, a welcoming sight for any Michigan fan. Brandon Hawthorne made the first big stop and the second was by Jake Ryan, two bright linebackers. And finally, the obvious choice and the game winning touchdown. If I had been in Brady Hoke’s position, I would have tried to kick a field goal and sent the game into overtime. After the game, Hoke said that you play the game to win, which pretty much explains why he called  one more play. It was a miracle Michigan won, and a lot of credit should go to the wide receivers who came up big when it mattered most.