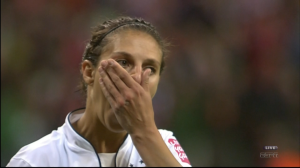 Not everyone is a soccer fan. Understandably.  Would everyone want to watch the Masters? Ok, probably not. However, with America in the Women’s World Cup Championship, you would think it would be bigger news than it was. 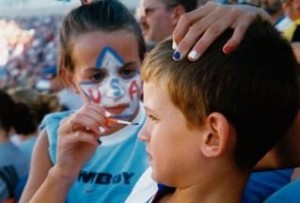 My sister, Lauren, and I attended the 1999 World Cup in Chicago with our family. (That’s us at the game in the photo above with Lauren painting my face.) I called her before today’s game and asked her if she was watching. She replied, “What game?” Although Lauren is not the biggest sports fan, my sister considers herself a fan of soccer and of women’s sports in particular (she played field hockey in college). Lauren claimed that she only found out yesterday that the World Cup was going on. Say what you will about her lack of interest in top headlines – Lauren definitely knew when the Men’s World Cup was ongoing last summer. This is my point.

Ask anyone about the 1999 Women’s World Cup and they will likely bring up the image of Brandi Chastain ripping off her shirt after scoring the winning goal, or at least recall pivotal players such as Mia Hamm. This year’s team is not as iconic as the 1999 World Cup team. Wambach, Rapino and Solo come no where close to Hamm, Fawcett, and Chastain.

This year’s final game was nerve-wracking, considering the many goal opportunities had by both teams.  U.S.A. had a plethora of shots, several getting knocked down by the goal post. It wasn’t until the 69th minute when U.S.A.‘s youngest player, Alex Morgan, came away with the game’s first goal.  Morgan started out as a sub but was inserted at the start of the second half. She got a break from a deep pass, beat her defender with a burst of speed, and finished her shot with a roar.  Japan came right back to tie the game in the 80th minute. A forced turnover led to a miss, clear in front of the net, and Aya Miyma finished. 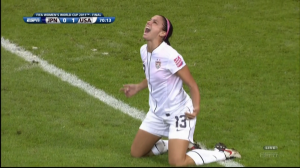 The game went to shoot out because of two goals in OT. Abby Wamback finished a header during the first 15 minutes of OT and Japan countered with a tying goal in the second 15 of OT by the tournament’s leading goal scorer, Homare Sawa. In penalty kicks, the United States couldn’t find their range missing the first 3 attempts. Japan, on the other hand, only missed one of their PK opportunities. Still, it was an amazing game and hopefully you cared enough to watch like this lovely family did! 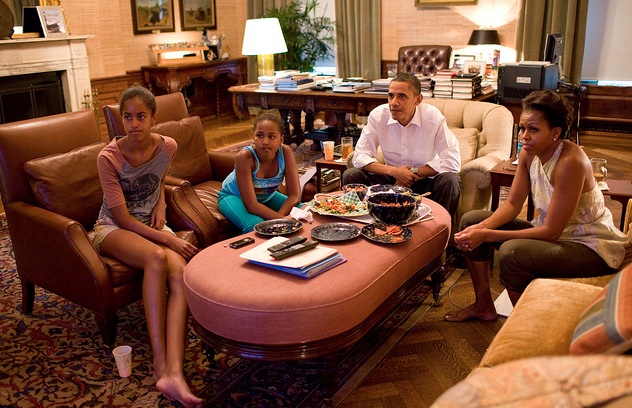