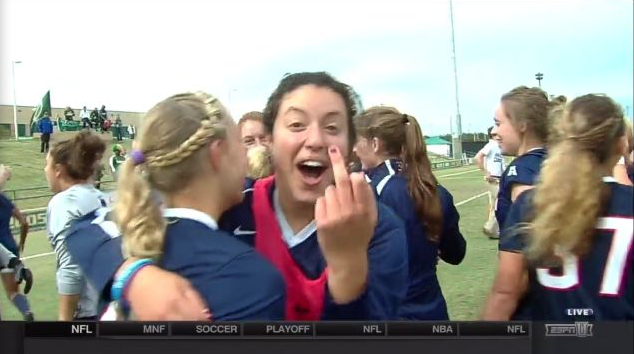 On Sunday, the UConn Women’s soccer team took home the American Athletic Conference title. They were excited to say the least and one girl decided it would be a good idea to flip the bird to everyone watching on ESPNU.

The school immediately issued a statement and suspended her from the NCAA Tournament.

The University of Connecticut and its women’s soccer program would like to apologize for an inappropriate gesture a UConn student-athlete made to an ESPNU camera following today’s American Athletic Conference championship game. In particular, we apologize to the American Athletic Conference, our opponent and host school USF and to the members of the television audience. The gesture showed poor judgment and sportsmanship and does not represent what we want our program and University to stand for. The issue has already been addressed by the coaching staff to the student-athlete. The student-athlete has been indefinitely suspended from all team activities, including participation in UConn’s upcoming NCAA tournament games.

Probably should have thought that one through.