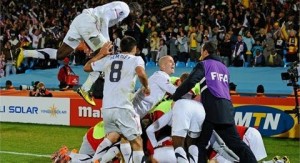 The United States making a run in the World Cup was great for soccer in America. The game of soccer is special, but having a team especially your home country to root for makes it intense. The U.S. did show that is not as good as Europe, but could someday be. For the U.S. having to send out 7 or 8 very solid players and 3 or 4 guys you would rather have replaced by someone else makes winning a World Cup nearly impossible. European teams don’t have guys that aren’t up to par. The United States as a nation need to continue developing talent and having more kids grow up playing soccer to become a world power it someday should.

One team that stood out to me and everyone who followed the Cup was Germany. The teams youth did not hurt them a bit and you could see them gaining confidence with every minute. Germany finished in 3rd place this year, but It would be no surprise to me if Germany won it all 4 years from now.

The tournaments championship game had Spain topping Netherlands 1-0. It was everything you could have hoped for in a title game. Tied throughout the game, no one watching wanted to see penalty kicks. Spain scored a goal in overtime on a great finish by Iniesta. Even though I was rooting for Netherlands, Spain showed that is was the better team and deserved to win. Netherlands did have its opportunities, but mostly played without the ball for most the game. This entire World Cup was great and it’s sad to think another Cup is four years away. 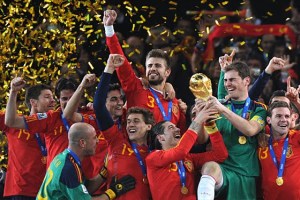