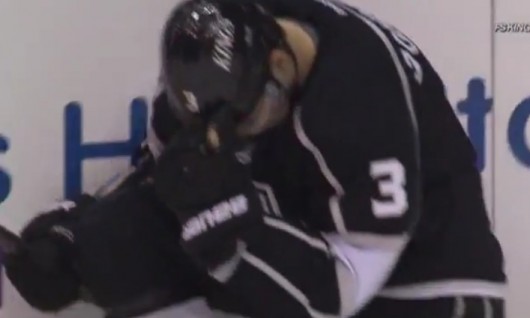 Tim Tebow has basically been dominating the sport headlines this entire NFL season. He recently had his best NFL performance against the Pittsburgh Steelers, throwing for  316 yards and delivering an 80 yard TD to Demarious Thomas for the overtime victory.

By now, everyone knows about Tebow and his ‘Tebowing’ sensation. According to Tebowing.com, Tebowing is the act of “getting down on a knee and start praying, even if everyone else around you is doing something completely different”.

Jack Jackson of the Kings broke out into Tebowing fashion after scoring against the Washington Capitals on Monday night.

Of note: Jack Johnson, was once upon a time, a defenseman for the University of Michigan hockey team.  U of M also produced Patriots quarterback, Tom Brady, who Tim Tebow and the Broncos face on Saturday.