Is the NHL’s Winter Classic going to be cancelled this week?

There are multiple reports out now saying that the Winter Classic could be in jeopardy this week.  The NHL says that the final deadline for an 82-game season is November 2nd, and there is almost a 0% chance that a deal will get done by then.  That means that they are going to start cancelling games.

The NHL is afraid that the NHLPA will try to use the Winter Classic as a way to get a deal that benefits the players, and the NHL, selfishly, would rather cancel the event than let the players use it to their advantage.

Rob Rossi of the Pittsburgh Tribune-Review says that, “The Tribune-Review first reported earlier this month that NBC, the NHL’s national broadcast partner, had started planning for alternative programming to replace the Classic. HBO, which had produced the ’24/7: Road to the Winter Classic’ series each of the past two Decembers, must know by mid-November if that program can go off as planned.” 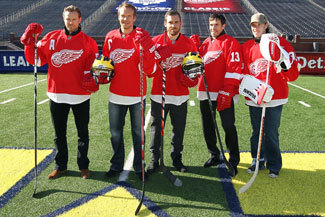 While it seems poetic and perfect to make the Winter Classic the first game of the year, it simply takes too much effort and planning for it to work that way.  The Winter Classic effects Junior and College teams now, with special games planned at Comerica Park, and it greatly effects the city of Detroit and the areas around it.  Areas that desperately need the money that would be generated by such an event.

This years Winter Classic would be the biggest event in NHL history.  An event that pitted two Original Six hockey teams, in front of 115,000 fans.  It was going to be a spectacle with HBO’s 24/7 providing all-access coverage the whole way.

And as of right now, this is in huge jeopardy and the real losers are going to be the fans in all of this; all of the players and owners conveniently forget about the fans and they’re the ones that get screwed out of the most.  And then when the time comes, they expect everyone to just conveniently come back and enjoy their game.