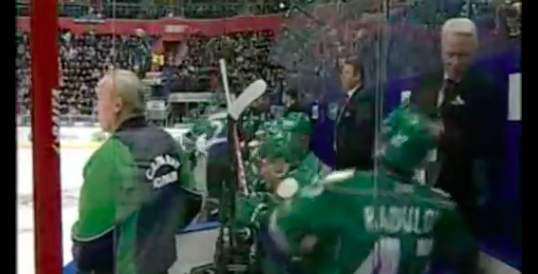 Alexander Radulov previously played in the NHL for the Nashville Predators, but now the 25-year-old is skating for KHL squad, Salavat Yulaev Ufa. Radulov is doing quite well playing in the KHL. He is the reigning MVP and won the Gagarin Cup last year. However, off the ice, he’s made news for all the wrong reasons, including his conflict with the team’s head coach, Segei Mikhalev, tweeting that the “coach is getting on my nerves, and I am asking for a trade.”

Radulov is back in the news again after this backhanding slash to the team’s goaltending coach, Ilari Nackel. According to RAI Novosti article, Radulov will be getting some time off for the team’s upcoming Euro Hockey Tour in Sweden. The reason given for the time off, according to the report: “Radulov has played in 42 of Salavat Yulaev’s 46 games so far this season, including seven times in the last two weeks.” This situation is too bizarre to completely understand, but what appears to be Radulov intentionally smacking his coach with his stick must have factored into the decision to keep him from traveling with the team.