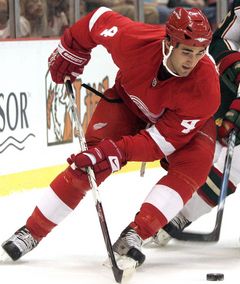 Earlier today former Wings defenseman Kyle Quincey was traded from Colorado to Tampa Bay for Steve Downie.  Minutes later it was reported and confirmed by TSN’s Bob McKenzie that he had been traded to Detroit for a 1st round pick and Sebastien Piche.  This is a great trade  for the Wings, Quincey is a physical defenseman who can still contribute in the offensive zone.  Think of Quincey as another Brad Stuart type defenseman.  In 2008 the Wings put Quincey on waivers because he couldn’t crack their lineup and he was later claimed by the LA Kings.

For the Wings, Quincey has one year left on his contract worth $3.1 Million and is set to be a restricted free agent.  If Lidstrom retires and Brad Stuart decides to return to the west coast (because his family never moved with him to Detroit), then they have a defenseman that they can insert into their lineup and will be immediately in their top 6.  With the cap room the Wings will have left they can easily make a move for another physical forward or defenseman.  At this point the Wings need to add depth, which Quincey will provide.  And, because Quincey is a restricted free agent, they can let him walk at the end of the summer and go after other free agents like Ryan Suter, Shea Weber or Zach Parise.