Ottawa Senators captain Daniel Alfredsson was forechecking in the Pittsburgh Penguins zone when he collided with defenseman Mark Eaton and his foot slammed into the boards.  The force caused the steel of his skate to pop out and resulted in some comical video of Alfredsson falling on the ice and then hopping to the bench.  Alfredsson had no clue the steel had popped out of his skate and watching him try to skate without steel was pretty hilarious.

It appears that Alfredsson is wearing the new Bauer ApX 2 skates that have a new feature where you can pop the steel of the skate out with a button, in order to put new steel in faster.  Unfortunately the product seems to make it so any forceful collision with the boards can pop the steel out and this won’t make NHL players very happy. 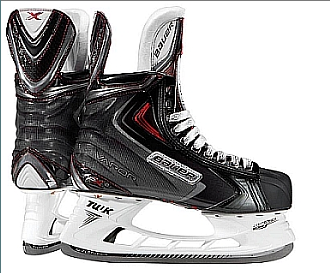