Concussions Continue to Cripple the NHL - A Look Behind The Statistics -

Concussions have hit the NHL hard and has the league seeing stars – in the stands instead of on the ice.

The NHL got news today that another star is out indefinitely after suffering a concussion. Nashville Predators defenseman Shea Weber was hit hard on December 23 by Mark Fistric of the Dallas Stars, and Preds coach Barry Trotz says that there is no timetable for Weber’s return.
Weber joins a star-studded list of other NHL players who have been sidelined with concussions this season, including well documented injuries sustained by Sidney Crosby, Ryan Miller, and Chris Pronger. Here’s a look at some statistics for the 2010-2011 NHL season compiled The Concussion Blog: 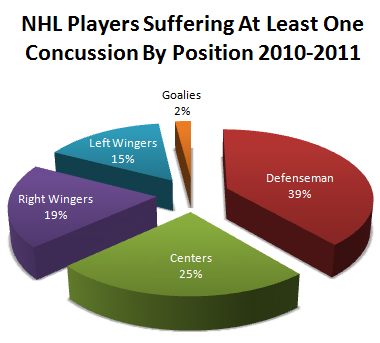 This graph shows that defenseman suffered the most concussions compared to other positions.  However, splitting the number in half (to account for a right and a left defenseman) will give you 19.5%, which compares with the other positions at around that 20% mark.  The prevalence for concussions appear to occur on any part of the ice. 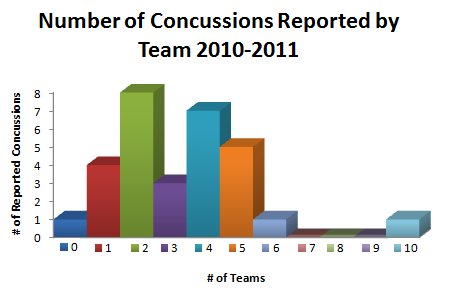 Obviously, ice is a lot harder than grass or wood.  Baseball pads stadium walls, while hockey offers the comforting support of steel and plexiglass.  With increased awareness players and doctors aren’t taking chances, and players will sit until they are 100% healthy, as they should.  With more emphasis being placed on treatment this season, the league needs to take initiative and research all methods of prevention.  Rule changes such as removing touch icing and the goalie trapezoid are two easy ways to stop players flying full-speed towards the boards for the puck.  Sidney Crosby being compared more to Eric Lindros rather than Wayne Gretzky is not a good sign for the future of the NHL.

In this article:Hockey, Sidney Crosby