During Winter Classic Melee, Badly Beaten Rangers’ Fan Turns Out To Be Cop 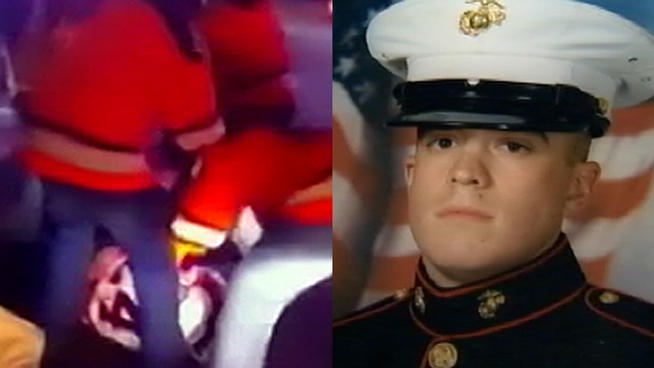 This is reason number one of why you don’t wear an opposing team’s jersey to a Winter Classic Game.

On Monday, after the Winter Classic in Philadelphia, a melee broke out between two Rangers fans and three Flyers fans. right in the middle of the street, between Geno’s and Pat’s Steaks.

Apparently, the argument between the Rangers and Flyers fans began after one of the Flyers fans allegedly paid a man washing windows, to spray a Rangers fan.

The man wearing a number-28, Claude Giroux Flyers jersey, began the fight by taking a swing at a man in a number-24, Ryan Callahan Rangers jersey.

The Rangers fan in the Callahan jersey, happens to be Neal Auricchio, a NJ off-duty cop and an Iraq War Veteran.

Auricchio took a pretty bad beating from the three men, although some civilians attempted to help. Auricchio’s father told NBC New York that his son,  “got banged up pretty badly. Stitches in the one eye, and the other eye is pretty puffed up. He went for a CAT scan today, and we’re waiting for the results on that.”

The original video of the fight was posted to YouTube, but has since been taken down because of the “graphic violence and language.”

A very bad display for the city and sad story for a Marine who earned a Purple Heart in Iraq, and went back for a second tour, even after he was shot in the leg.

Police are still trying to identify the men in the Flyers jerseys. This is frightening.

Concussions Continue to Cripple the NHL – A Look Behind The Statistics
Video: Kings’ Jack Johnson Tebowing After Goal