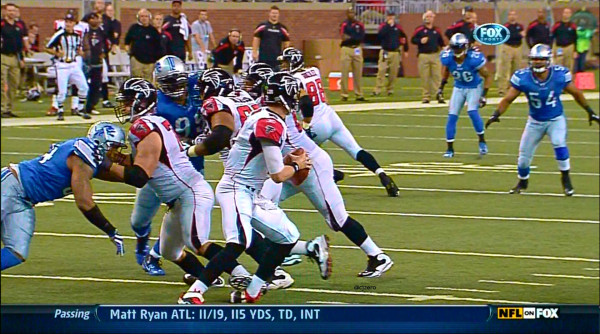 Atlanta Falcons quarterback, Matt Ryan, is one tough dude only going out of the game for two plays after this gruesome ankle injury. Ryan’s ankle was stepped on by offensive lineman Will Svitek, which forced backup Chris Redman into the game. Ryan’s ankle injury probably doesn’t beat that of Eric Foster.

The bigger news may really be what transpired while Ryan was on the ground injured.  According to multiple Atlanta Falcons players, the Detroit Lions Ndamakunh Suh and Cliff Avril were taunting an injured Ryan.

“I had respect for Suh before the game,” Falcons center Todd McClure told the Atlanta Journal-Constitution. “But when Matt was on the ground, the things he was saying and the trash he was talking was definitely uncalled for. There are certain things you don’t do. [He said], ‘Get the cart’ and several other things that I can’t repeat.”

Falcons receiver Roddy White said Suh was one of a couple of classless Lions.

“I lost a whole lot of respect for 90 [Suh] today, and also 92 [Cliff Avril], the [bleep] they were doing when Matt got hurt. That was unacceptable,” White said. “Like 92 was kicking [Ryan’s] feet, saying, ‘Get him off the field.’ We don’t do stuff like that. We don’t rally over guys when they get hurt. It was just inappropriate behavior. I mean, ‘Get the cart’? Are you serious? Come on. When you compete, you never want to see a guy get hurt.”

Detroit needs to remember that although they started off 5-0, this is a 16 game season, and teams will be shooting for them especially after incidents like this.