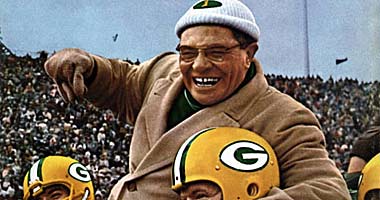 “Winning isn’t everything, it’s the only thing.” Vince Lombardi

Vince Lombardi reached the pinnacle of coaching in Green Bay, winning three NFL Championships and two Super Bowl titles.  Although Vince Lombardi’s coaching rule was well before my time, he is still a prominently talked about sports figure today. Recently, I finished a biography about Lombardi titled When Pride Still Mattered by David Maraniss, and I came away very impressed by Lombardi’s rise to the top, his heralded coaching tactics, and his surprising support of civil rights. I thought it was only right to share  some of his story and a few of my thoughts.

Lombardi’s family was from Salerno, Italy but moved to Brooklyn, New York, where he was born in 1913.  His father got a job in the butchering industry and Vince started out working there with his dad. He was considered a rough kid growing up, frequently getting into fights and trying to boss people around. Football didn’t start for Vince until high school, but it did eventually take him to Fordham University where he played as a guard.  Though Lombardi was not a star at Fordham, he was a member of the “Seven Blocks of Granite,” a name given to the front line players at Fordham, and was part of a team that nearly made the Rose Bowl. It was at Fordham that he also met his eventual wife, Marie.

After graduation, Lombardi asserted himself into the coaching profession. He started off coaching at St. Cecilia in Englewood, New Jersey, where he was also a PE teacher. He went back to Fordham as an assistant coach, eventually being hired at West Point under Colonial Red Blaik. Under Blaik, Lombardi learned most of his coaching tactics and strict regimen of teaching the game. He then got a position with the New York Giants as defensive coordinator, where he led a ferocious defense nearly to a title.  All of these stops would hopefully lead Lombardi to his eventual dream, a head coaching position.  Twenty years after St. Cecilia, the Green Bay Packers came calling.

Lombardi had a long journey until his eventual destination, but he was met with the perfect opportunity. He arrived in Green Bay in 1959 amidst chaos and they needed a savior. The team had recently finished 1-10 and the NFL was threatening to send the Packers out of Green Bay. Vince was still not a household name at the time, but was impressive enough in his interview with the Packers Board of Directors, that he grabbed both the head coaching position as well as the general manager position. This was crucial because he now had all the power of signing and trading players.  Things quickly turned around in Green Bay and the Packers became an NFL elite within the first year. Lombardi won Coach of the Year and the team finished first in its division at 7-5.

His hard-nosed ways got the best out of each of his players. All current perceptions about Green Bay Packers tradition, pride and excellence came during Lombardi’s rule. He trained his Packers teams to win games on desire and want. Training under Lombardi was a grinding, tough experience like no other. The team would run the “Packers Sweep,” a play that Lombardi perfected with his charges over and over until everyone had done their job perfectly. One of his many coaching mantras, Lombardi stressed teaching his players through repetition so that even the slowest learner new his role. Lombardi prided himself on crafting extremely tough players who could play together as one unit.

Though the public rarely saw his softer side, Lombardi was a strong believer in equality. He believed that no one on his team was black or white, but only Packer green. One of his first acquisitions as GM was trading for Emlen Tunnell, an African American safety from the Giants. When traveling to away games, the Packers would only stay at hotels that would accompany their entire team; Lombardi refused to have his team separated due to race. Similarly, having a homosexual brother, Harry, likely led Vince to feel as strongly as he did about sexual orientation as he did about race. In fact, Lombardi privately hoped during a Redskins training camp in 1969 that Ray McDonald, a gay player, would prove a roster spot.

Lombardi’s sternness and intensity over winning probably played a part in his early death. He refused to get a prostate check because he said he would “never let anybody stick anything up his butt.” Lombardi was so well known and respected that during his final days, President Richard Nixon encouraged Lombardi by telling him that, “America was behind him.”  Lombardi died of a rectal cancer at 57.The Packers have kept several of Lombardi’s traditions still going today. During training camp, Packers players ride from the practice field to Lambeau field on the bikes of young fans waiting outside, as they did when Lombardi led them.

My favorite story of Lombardi came when Jim Ringo went into Lombardi’s office asking for new contract. Ringo brought his agent to the meeting, though at this time sports agents weren’t generally a part of most bargaining processes.  Lombardi, taking offense said, “I don’t negotiate with agents. Hold on, let me make a phone call.” Lombardi turned away and picked up the phone.  The moment he hung up he said, “I told you I don’t negotiate with agents. You’ve just been traded to Philadelphia.”

Given what’s going on in the world of sports these days, this quote both makes the point and over-emphasizes the nature of what sports have become.