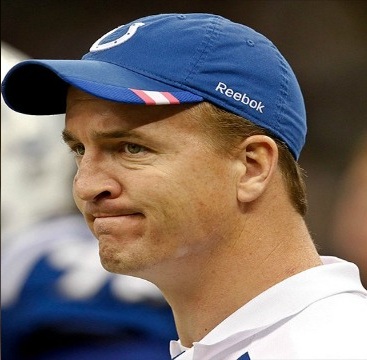 
This would seem pretty far fetched that an actor would break major news that one of the NFL’s best players is calling it a career, except that Lowe is boys with Colts owner Jim Irsay.  “Parks and Recreation” is set in Indiana and “St. Elmo’s Fire” is a legendary Indianapolis steakhouse.  Obviously, Lowe is a trusted source.

The Colts franchise has been in disarray since Manning was ruled out for the season following neck surgery.  The problem with Manning’s neck is considered to be career-threatening, and really, at the risk of paralysis what more does the 36-year-old future HOF QB have left to prove?

With the sudden firing of Jim Caldwell and the franchise poised to select their next franchise QB, could this pave the way for Manning to step in to lead the Colts and personnaly groom Andrew Luck?

If Manning really is injured more than he believed, this actually could make perfect sense.  He is a God in Indy, he’s built a legacy that is untouchable, and he would command the respect of everyone in the organization.  Also, let’s be real, he’s was already running the show while he played or Caldwell wouldn’t have been so easily disposable.

Until we hear from the mouth of Manning, follow Indy’s new insider for breaking news: