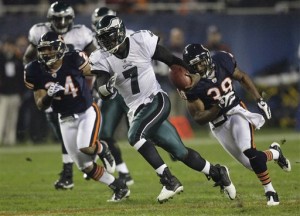 Dallas Cowboys are known for having some of the NFL’s best players including Emmitt Smith, Troy Aikmen, Deion Sanders. This year’s team is no different with Tony Romo, Demarcus Ware, Miles Austin and Jason Witten. They even drafted Dez Bryant, Oklahoma State’s talented receiver. The Dallas Cowboys often have a problem with players who draw attention to the team for the wrong reasons. Recently drafted receiver Dez Bryant made news for refusing to carry Roy William’s pads as part of a rookie hazing, and then spraining his ankle on the second day of training camp. Dallas has a team that could easily win the division, but whether or not they bond during the offseason and become a cooperating team will tell whether they meet their potential like former Cowboy’s teams.
Prediction: 11-5, first place in division.

Key Additions: S Antrelle Rolle, DE Jason Pierre-Paul
Key Losses: MLB Antonio Pierce
New York Giants are led by head coach Tom Coughlin and qaurterback Eli Manning. The offense has the capabilities of being able to carry the team. Running backs Ahmad Bradshaw and Brandon Jackobs could be the best duo in the entire league. The Wide receivers, Mario Manningham and Hakeem Nicks, could also be something special this season. Defense this year will be led by offseason pick up free safety, Antrelle Rolle and Osi Umenyiora, considered the best defensive end when he’s playing to potential. New York drafted South Florida’s rush end Jason Pierre-Paul, who should team up with Umenyiora for dynamic ends. Expect the Giants to be at or near the top of the division standing.
Prediction: 9-7, second place in division.

Key Losses: QB Donovan McNabb, RB Brian Westbrook, G Shawn Andrew, MLB Sean Witherspoon.
Philadelphia Eagles: Years after the Eagles fans booed the selection of McNabb’s instead over Ricky Williams, Philadelphis fans no longer have to deal with McNabb as the teams quarterback. McNabb, though, is on the division rival Redskin’s, so he will still get booed by Philadelphia fans. Eagles will be led by first time starter, Kevin Kolb who should be a solid replacement with receiving options Jason Avant and DeSean Jackson. The Eagles also no longer have running back Brian Westbrook, who like McNabb, is on the Redskins, but are still capable of running with LeSean McCoy and head coach Andy Reid’s play calling. On defense, they are led by shutdown corner back Asante Samual, and this years first round pick, Brandon Graham, who should a beast.
Prediction: 8-8, third place in division.

Key Additions: QB Donovan McNabb, RB Brian Westbrook, OT Flozell Adams, WR Joey Gallaway, DE Vonnie Holliday, RB Larry Johnson, RB Willie Parker, OT Trent Williams
Key Losses: WR Antwaan Randel El, QB Todd Collins, CB Fred Smoot.
Washington Redskins have made news a lot this offseason for the signings of former Eagle’s quarterback Donovan McNabb and running back Brian Westbrook, Steeler’s RB Willie Parker, Chief’s Larry Johnson as well as new head coach, Mike Shannahan. These guys will bring winning experience to a team that has been lacking for a long time. The defense could be stout led by LaRan Landry, London Fletcher and DeAngelo Hall. Albert Haynsworth, who can be the most dominating lineman in the league, first has to pass the mandatory conditioning test and show his commitment to the team. Washington could come out of the division on top but I don’t think everything will click like planned.
Prediction: 7-9, fourth place in division.
In this article:NFL, NFL Preview