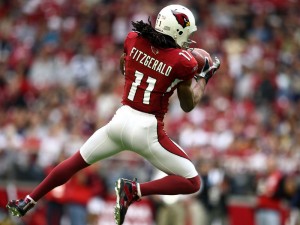 San Fransisco 49ers- The 49ers have been close to winning the division the last couple of years and this year they finally will. With quarterback Alex Smith playing like a seasoned veteran at the end of last year if he can be productive throughout the season, it will prove why he was drafted #1 overall in 2005. Smith’s favorite targets are wide receiver Michael Crabtree and tight end Vernon Davis two big physical athletes that can catch anything thrown their way. Running back Frank Gore is a beast and could be in the discussion as the one of the top 3 or 4 backs when healthy.   On the defensive side of the ball, the 49ers are led by MLB Patrick Willis, CB Nate Clemente and DE Justin Smith. I expect a breakout year for the entire team.
Arizona Cardinals- With Kurt Warner retiring, the Cardinals biggest concern is who will step up at QB. Matt Leinart, the 2004 heisman trophy winner has looked sluggish his entire NFL career and already lost his job to former Browns QB, Derek Anderson. Arizona although,  has weapons on offense. Running back Beanie Wells is a powerful downhill runner capable of taking it all the way on every touch.  Wideout Larry Fitzgerald is the most physically gifted player who can catch anything .  The Cardinals defense, however, took a hit this offseason loosing MLB Karlos Dansby and safety Antrelle Rolle in free agency, but this group still can be solid.
Seattle Seahawks– With former USC head coach Pete Caroll patrolling the sidelines, expect the Seahawks to run a similar offense to that of USC’s.  They have quarterback Matt Hasselback, who has been solid throughout his career, to lead the team and also home run threat, T.J. Houszamazadah.  Lofa Tatupa is the man on defense, running sideline to sideline from his middle linebacker position. Seattle also has cornerback Marcus Trufant who will snag a pick here and there. Those two guys are the playmakers on a defense that I don’t expect too much from.
Saint Louis Rams- Recently #1 pick, Sam Bradford showed off his potential against the Patriots in a preseason game. Bradford has all the physical tools to become a very solid quarterback but that won’t happen in his first season because the Rams don’t have many playmakers other than running back Steven Jackson. Last year’s leading receiver, Courtney Avery, is out for the season with a torn ACL loosing another person capable of making plays. The defense is also a work in progress. Some good young players can step up in this situations, like James Laurinatis, but the Rams still are a year or two from contender in this division.
In this article:NFL, NFL Preview