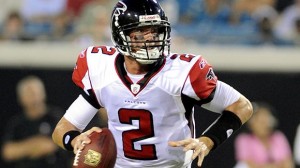 New Orleans Saints- won the Super Bowl last year and could easily repeat. They return the core offensive players, Drew Brees, Marquis Colston, Reggie Bush, Jeremy Shockey who make the offense one of the bests.  On the defensive side of the ball,  Darren Sharper is a solid safety along with defensive lineman Will Smith and linebacker Johnathan Vilma. The addition of Florida States cornerback Patrick Robinson will help the secondary.  The Saints need the defense to create turnovers like they did last season or else they won’t repeat as Super Bowl champions.
Prediction: 11-5, first in division.

Atlanta Falcons- Are led on offense by quarterback Matt Ryan (below). Ryan has all the tools to be one of the best QB’s in the league. He has guys that can catch the ball  like Roddy White and TE Tony Gonzalez. Running back Michael Turner is a beast.  Turner could be the best fantasy running back in the NFL with the amount of touches and touchdowns. Defense is led by linebacker Curtis Lofton, cornerback Dunta Robinson and defensive end John Abraham. The Atlanta Falcons problem is that they don’t have enough special talents across the board to win this division over New Orleans

Carolina Panthers- drafted Notre Dame’s quarterback Jimmy Clausen to replace the one time starter Jake Delhomme. Clausen will most likely will back up Matt Moore, who produced well at the end of last season. The position of strength for the Panthers is the running back, with speed back Deangelo Williams and power runner Jonathon Stewart (below). Wide reciever Steve Smith, when he can stay on the field without injury, is electric with the ball. Linebacker John Beason is the leader of the defense and hits like few other players can. Chris Gamble is also a solid cornerback, but the Panthers no longer have the talent on defense side of the ball that previously made Carolina teams so good.
Prediction: 7-9, third in division.

Tampa Bay Buccaneers- have a young foundation on offense. Last year’s first round pick, quarterback Josh Freeman (below) has the arm that can win some games. Cadillac Williams is a downhill type of runner that fits the Buc’s running game. The wide recievers are Arelious Benn and Mike Williams, who were drafted this season with all potential. The defense was upgraded with drafting defensive tackles Gerald Mccoy and Brian Price. These two will clog up holes and help the entire defense as a whole. Aqib Talib is potential lock down corner opposite of Ronde Barber. Tampa Bay is a few years away from being able to contend in this division but they are developing a strong group of players.
Prediction: 4-12, fourth in division.

In this article:NFL, NFL Preview