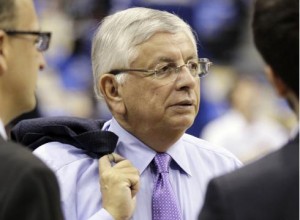 The end of the 2009-2010 National Basketball Association (NBA) season, according to NBA Commissioner David Stern, was marred by an overall loss of $250 million.  With the current NBA Collective Bargaining Agreement (CBA) expiring June 30, 2010, the most important issue to address is the loss sustained by the league.  It is the belief of the owners that the best way to counter the losses incurred by the league is to propose changes to the current CBA that include: the institution of a hard salary cap with incentive-based salaries that also includes a salary floor, elimination of free-agent exceptions, raised age limits for players to enter the draft, revenue sharing among all NBA teams, and as a last resort, relocation or contraction of teams in the league.

HARD SALARY CAP: The current soft cap and luxury tax combination that the NBA uses has, in part, led to the lack of competitive balance in the league. Three of the top four teams in terms of salaries have won the last four NBA championships, with the fourth team making it to the finals only to lose to another top spender.  Each of those top four teams is close to doubling the soft cap of $58 million and opted to take their penalty in the form of the luxury tax.  Implementing a hard salary cap that would also get rid of the luxury tax will increase competitive balance by decreasing the price of talent, making it more affordable for the teams at the bottom end of the salary pool.  The payroll of the large market teams will surely fall with a hard salary cap in place, and the effect on the small market payroll is unknown- the lesser price of talent means they could potentially buy more talent, raising their payroll.  Overall, the payrolls of the teams of the league will be down and profits up.  The following graph indicates the effect of a hard salary cap.

Incentive Based Salaries: In addition to the hard cap, the owners propose that incentive based salaries be used as a means to compensate the players.  Contracts for players should be less in length, have less up-front money given to players, and should be heavily based on players successes on the court.  This incentive-based approach should eliminate extensive waste of money on part of the teams.  An excellent example is Eddie Curry.  Curry made $10 million in 2010 while appearing in only seven games.  Other examples of the need for incentive-based salaries include Yao Ming and his $17 million dollar contract and also Elton Brand’s $16 million.  Ming and Brand are the ninth and seventeenth highest paid players in the NBA.  Ming has been injured and missed significant playing time for the past few years now. Similarly, Brand was signed by Philadelphia after big seasons with the L.A. Clippers and cashing in during free agency. The incentive-based salary approach keeps from guaranteed money simply being given away for little in return, and should help the league to be profitable, while also keeping payrolls down.

Salary Floor:With the hard salary cap and incentive based contracts, there should also be a salary floor. The salary floor in conjunction with the hard cap enhances competitive balance and ensures that teams will virtually be on equal playing ground in terms of the ability to buy talent.  Payrolls should be relatively close to one another and profits should be healthy across the board.  The revenue sharing the owners have proposed will act to ensure that all teams will be able to meet the salary floor which also further enhances competitive balance.

ELIMNATION OF FREE-AGENT EXCEPTIONS: The elimination of the extremely excessive number of exceptions to the salary cap allowed by the current CBA is also proposed by the owners.  Because these exceptions drive up the price of talent by astonishing amounts, the elimination of those exceptions will reduce the price of the players, thus increasing competitive balance, keeping payrolls and wages lower, and making the league much more profitable overall.  As a result, the several different “Bird” exemptions would no longer be in effect.

INCREASED PLAYER AGE LIMITS: Eddie Curry is an example of not only why incentive-based salaries should be put in place in the NBA, but also of why age limits to enter the NBA should be increased as well.  Currently, there is a minimum age limit of one year out of high school to enter the NBA, which the owners would like to see increased to two years.  Curry, who entered the NBA straight out of high school like other “busts” such as Kwame Brown, Jonathon Bender, are examples that there needs to be more polished talent in the NBA to prevent from money essentially being thrown away.  That increase in the number of years out of high school to be allowed to play in the NBA should shape players to have more well-rounded games.  The increase in the talent of new entrants to the league should not only make for a more competitive league, but generate much more excitement for the game.  That excitement should translate into more profitability in terms of attracting fans to come out to the arenas to watch the best basketball in the world.  The money spent on players like Curry and Brown is money that could have potentially been spent on players that were more successful playing professional basketball.  Thus, the opportunity cost of paying players that are deemed busts is not paying for better players who would have helped the team much more. Also, it is important that players entering the NBA are well rounded and of good “character.” An additional year should increase player maturity and also decrease the number of off court related issues.  It’s in the best interest of the league to get players that represent the NBA well on and off the court. For example, Darius Miles was drafted #3 by the Clippers straight out of high school and was a decent player throughout his career. However, his immaturity off the court and several run-ins with the law does not promote a positive image of the league.

REVENUE SHARING: Increased revenue sharing from monies generated from television deals and gate receipts, among other things, would also help teams to be more competitive when combined with the proposed hard salary cap to be put in place.  The salary cap will increase competitive balance by lowering the price of talent, as well as decreasing payrolls and increasing profits, which would be amplified by revenue sharing.  That lower price of talent will become even more affordable when revenues are shared equally among all thirty teams.  The additional revenues given to the small market teams that were taken from the big market teams, in conjunction with the hard salary cap, create a much more competitively balanced league-something the NBA desperately needs.  The following graph shows the effect of revenue sharing when a hard salary cap is in place.

RELOCATION AND CONTRACTION: As a last resort to combat monetary losses, the owners propose relocation and possibly contraction of the teams of the NBA.  A team that relocates is likely to do so to a larger market, which results in increased competitive balance, lower price of talent, and lower payrolls.  If the necessary steps are not taken to stop the NBA from losing money, then contraction of the league is a definite possibility.  The team to leave the league would probably be from a small market and is likely to be one of the teams losing substantial amounts of money and dragging down the rest of the league.  The effect of contraction is multi-fold.  First, the increase in supply of players available from the contracted team should mean that there are more players to choose from, driving down the cost of talent.  That in itself increases competitive imbalance, lowers payrolls, and increases profits.  Second, because the number of teams to play for is smaller, it should hold that only the best players are on the teams and thus the court.  That would make for a more competitive league and also a more enjoyable league for fans to watch which would make it more profitable.  Finally, as the owners have already proposed revenue sharing that, in combination with the hard salary cap, makes for a more competitive league, a contraction of the league means fewer teams to share revenues with which gives even more money to small market teams which could potentially increase competitive balance further.

Note: I did this in a group as a assingment for my Sports Econ class. Thought it was worth a post. It basically summarizes what the NBA owners will want in the agreement which is a lot.

In this article:David Stern, NBA