Chiefs' Jamaal Charles out for the season - 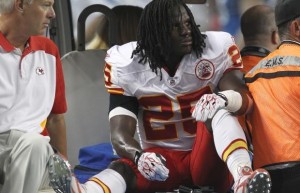 Chiefs running back Jamaal Charles is one of the bright young backs in the NFL.  Charles, 24, rushed for 1,467 yard last season and averaged 6.38 per carry, the second highest average in NFL history.

During the first quarter of the Kansas City Chiefs vs. Detroit Lions game, Charles lost his balance and took an awkward step on the sideline. He then fell to the ground tearing his ACL as ESPN’s Adam Schefter reported.

Kansas City took a beating from Detroit losing 48-3, having coughed up six turnovers and allowing Matt Stafford to throw four touchdowns. This team could be slated for a top pick in next years NFL draft, with two stars, Eric Berry and Jamaal Charles on the out for the season list.