The Detroit Lions are taking the NFL by storm -

By coming back from 20 points down at halftime and beating the Minnesota Vikings 26-23 on Sunday, the Lions are 3-0 for the first time since 1980.

Detroit also snapped a streak of fourteen consecutive years losing to the Vikings in Minnesota.

The Lions’ offense, led by Matt Stafford, is one of the most dangerous in the league. Stafford, a former #1 pick, has always had the arm strength and potential coming out of college. Former 49er QB and current ESPN analyst, Steve Young, recently said that Stafford can be the one of the greatest quarterbacks ever to play. Of course, the concern with Stafford is whether he can stay on the field and away from injuries. Last year he was hampered by a shoulder injury, keeping him out thirteen games.

Stafford has great targets to get the ball to. Calvin Johnson, the most physically dominant wide receiver in the league at 6’5 and 4.3 speed, already has 6 TD’s through three games, an NFL record.  Opposite Johnson is Nate Burleson, who is consistent at catching the ball and getting the extra yards. Another vertical threat, rookie Titus Young of Boise State, is the third wide receiver position. Young is becoming a focal point in the offense, making a couple of big third down catches against the Vikings to keep the drive alive.

Stafford also has two tight end options, Brandon Pettigrew and Tony Scheffler. Pettigrew, who was questionable against Minnesota, had a giant 11 catches for 112 yards and was the unsung hero of the victory. Throw in running back, Jahvid Best, who is capable of going the distance on any play, and Detroit’s offense is nearly impossible to slow.

The Detroit Lions defense has been described anywhere from ferocious to dominant. Everyone knows Ndamukong Suh, who was voted by NFL players as the defensive player they would choose to start a team with. Suh and fellow d-lineman Kyle Vanden Bosch, Corey Williams and Cliff Avril give Detroit the best defensive line in the NFL. First round pick, Nick Fairley, has been injured so far this year but will make this line even more imposing.

The Linebackers are solid with free agent signees Stephen Tulloch and Justin Durant. Tulloch has been everything Lions fans hoped he would be when he signed with Detroit in the off season. Tulloch playing MLB has given DeAndre Levy a chance to play OLB, and make plays off the edge.  The group of linebackers is better than the league average.

The secondary has always been a major concern. However, with Louis Delmas playing like a All-Pro, ball hawking at his safety position, Detroit has looked much improved. Add Chris Houston, Eric Wright and Amari Spievey and Detroit has a young and improving secondary.

A lot of Detroit’s success this year will be on the shoulders of the offensive lines and their ability to protect Stafford. Detroit’s doing so well this year doesn’t surprise me. I had them ranked at #10 in my preseason top 10 teams, for which I got a bit of criticism from a commenter, Mike, who said, “WOW about the Lions at #10.”  Yeah, Mike, who’s the one WOWING now? 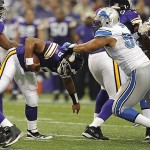 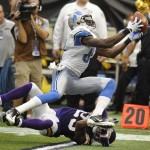