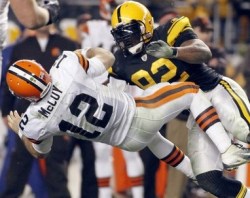 Colt McCoy and the Cleveland Browns showed a lot of toughness Thursday night against the Pittsburgh Steelers. The Browns made several big defensive plays but could not get the job done on offensive.

One of the more talked about plays was when Steelers linebacker, James Harrison, viciously hit Colt McCoy helmet to helmet. McCoy was obviously shaken by the hard hit and appeared to be seriously injured. McCoy returned to the game after sitting out only two plays. According to a report from Cleveland Plain Dealer, Colt McCoy’s father (Brad) was very upset he returned to the game.

“He never should’ve gone back in the game,” said Brad. “He was basically out (cold) after the hit. You could tell by the ridigity of his body as he was laying there. There were a lot of easy symptoms that should’ve told them he had a concussion. He was nauseated and he didn’t know who he was. From what I could see, they didn’t test him for a concussion on the sidelines. They looked at his (left) hand.”

In fact McCoy actually had broken his hand from the hit, but it seems bizarre that the training staff wouldn’t test for a concussion on a hit like this especially when you hear stuff like this next quote.

“After the game, the (public relations staff) made sure Colt’s interview was brief and he couldn’t face the lights in his press conference,” said Brad. “The TV lights and the Stadium lights were killing him. Why would you say he was fine? That makes it even worse.”

It’s completely reasonable for Colt’s father to be concerned for his son, but I don’t know why he went on to attach his teammate’s injury Josh Cribbs.

“Josh Cribbs suffered a groin injury earlier in the game and he was out for the rest of the game,” Brad McCoy said.  “Colt takes a severe hit like that and he’s back in the game a play later?  If he took another blow to the head, we could’ve been talking about his career here.”

Concussions have a became a major concern for the NFL and they have made it a priority issue with the recent changes with the rule changes. Colt McCoy shouldn’t have gone back into the game and the training staff should have done a better job of evaluating his injury and the situation. It’s understandable for a parent to get upset, but McCoy also is an NFL quarterback and not playing at Texas anymore.