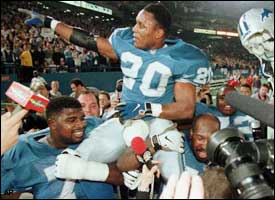 Barry Sanders opening for Monday Night Football between the Detroit Lions and Chicago Bears; is there anything better than that?

ESPN placed Sanders in the opening act for the game, because the previous guy, as many of you know, decided on live TV to compare President Obama to Hitler.

Calvin Johnson and Matt Stafford connected another touchdown, making it nine on the season. Jahvid Best ran untouched 88 yards for a touchdown and reminded Motor City fans of the former back who use to do those kinds of things.  Also, the Detroit defensive line never let QB Jay Cutler get set in the pocket and pressured him on almost every throw.

Way to hold it down Detroit.