The Baltimore Ravens visited the White House on Thursday and their Super Bowl rings have emerged courtesy of Adam Schefter, who was given a sneak preview prior to the rings going out to the players.  It’s certainly a lot of diamonds and a cool ring design except for the logo.  The Ravens logo looks absolutely brutal, almost like it was painted on there.  Certainly it is big and flashy, but there are a lot of previous Super Bowl rings that look a lot better, including the Ravens ring from 2000.

UPDATE:  Apparently the ring that Schefter had was a replica, and the ring below is the real ring.  Thank goodness, because the real ring looks a lot better. 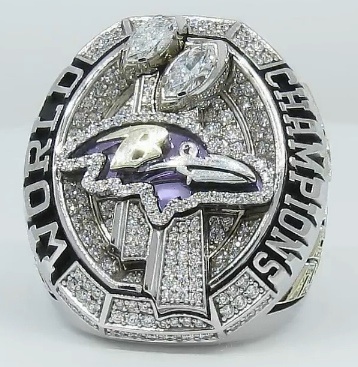