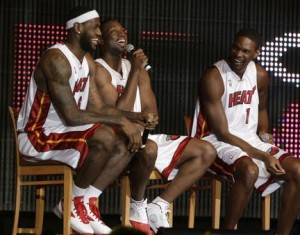 Lebron James will sign with the Miami Heat and team up with D-Wade and Chris Bosh. The anticipation over the summer for the free agent class of 2010 will never be higher. Lebron James was the main attraction and signed a 6 year deal worth over $100 million.Lebron’s announcement was far from good. Personally I wanted James in Chicago taking flight with Derek Rose in the wings of the greatest player ever, Micheal Jordan. Chris Bosh and Dwayne Wade set up the situation for James, who couldn’t resist teaming with his former olympic pals and making an NBA “super team.” All three players took a very big salary cut to play together. Miami is a good choice for Lebron wanting championships and hanging out at the beach. It’s not set in stone that they will win every NBA championship for years to come. Miami still needs a point guard, a center and a contributing bench. This “super team” is going to be great for NBA because they can showcase the Miami Heat and many of the best basketball players on the planet on one team.