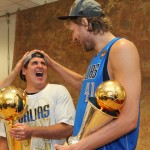 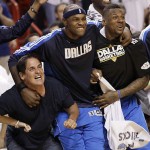 Dallas Mavericks’ owner, Mark Cuban, took center stage Thursday night on Comedy Central’s The Colbert Report. Stephen Colbert talked to Cuban about owning an NBA Championship team and what it’s like being a billionaire. That’s about the entirety of the interview.

I would have thought that Colbert, being the NBA fan that he is, would have forgone asking whether Karl Rove ever hit him up for cash and instead asked if he thought there will be a NBA season this year.