Heisman Trophy winner Johnny Manziel was seen sitting courtside for the Dallas Mavericks-Miami Heat game on Thursday night.  This prompted TNT commentators Steve Kerr, Marv Albert and Mike Fratello to discuss whether or not it was an NCAA violation for him to be sitting there; as in whether or not the tickets were improper benefits given to him by someone else.  Manziel must have heard about this because he took to Twitter to respond.

No need to worry Aggies fans, your quarterback will be just fine.  Some others also said that Manziel’s family was doing just fine financially, and his parents probably got him the tickets.

How expensive were the seats exactly?

Courtside seat Manziel is sitting in tonight typically resells for about $400 on regular games, $600+ for games like Heat.

Follow up on value of seat Manziel is sitting in tonight. One guy was selling his courtsides for $1,250 each tonight.

It’s really too bad that we have gotten to the point where any time we see a collegiate athlete with something nice that we assume they must be breaking an NCAA rule.  I always say, innocent until proven guilty, and Manziel hasn’t given anyone a reason to doubt him.

Johnny Football is a big fan of LeBron James: 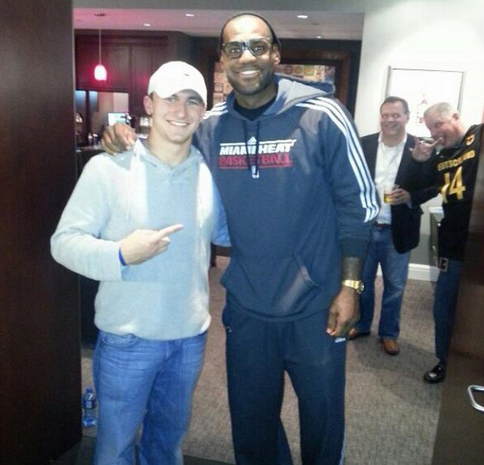