Dallas Mavericks Even Up NBA Finals 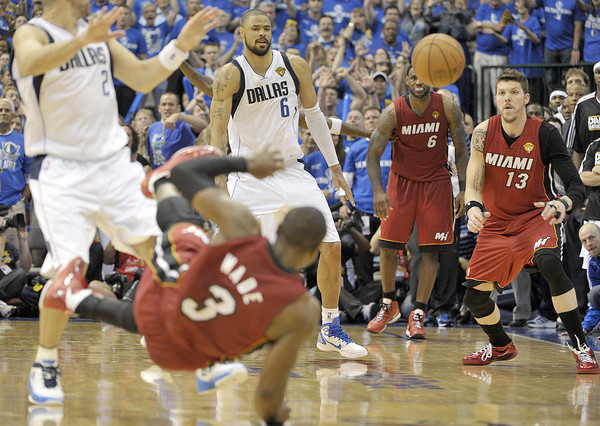 D-Wade had yet again a fantastic game, hitting unthinkable shots and playing great defense including two big blocks on Tyson Chandler near the end of the game. The above picture, the last possession for the Heat, Wade was unable to catch the ball cleanly but still somehow getting the ball to Mike Miller. Miller missed the game-tying 3 and gave Dallas a must needed win.

Analysis: Dirk Nowitzki somewhat struggled. He missed a lot of shots he normally would make. It was reported he had a 102 temperature during the game so he has some excuse. He still did hit a clutch shot with 18 seconds left. A better, healthier Dirk should make for a better game 5 performance.

One player with no excuse for his outing last night is Lebron James (8pts on 3-11 shooting in 46 minutes). Where is the Lebron James Game 5 against the Pistons? I really don’t understand this but at the end of the game it seemed like every time James touched the ball he looked to pass. Instead of taking his defender off the dribble and inserting himself he is backing off and letting Wade take ship. Lebron is too good not to dominate. He is easily the most talented and physically gifted player on the court. The Heat need James to step up. D-Wade needs James to step up. Miami won’t win this series unless Lebron does so and goes into attack mode all four quarters.