In light of the terrible events at this weeks Boston Marathon, the Boston Celtics nearly pulled off the emotional victory during Game 1 of the playoffs against the Knicks.

The Celtics played with a ‘Boston stands as one’ patch, but also had a charity drive.

The Boston Celtics announced today multiple initiatives to support victims affected by the recent tragedy at the Boston Marathon. The Boston Celtics Shamrock Foundation has committed to raise $200,000 to support The One Fund Boston to help the families affected by the Boston Marathon tragedy through a $100,000 pledge from the Shamrock Foundation and multiple team initiatives to raise an additional $100,000

“Our Celtics family and our fans join all Bostonians in demonstrating our city’s great strength by coming together to stand as one to get through this difficult time ,” Boston Celtics Managing Partner and Shamrock Foundation President Stephen Pagliuca said.” We are proud of all the heroic efforts that were made during this horrible tragedy and would like to show our support to those victimized by this terrible act.”

The Celtics have partnered with adidas to create a special Celtics limited edition t-shirt bearing the words “Boston Stands as One”. 2,620 of the shirts have been created with 100% of the proceeds from sales donated to The One Fund Boston. These adidas t-shirts, also known as “warm-up shirts,” will be available to consumers at Celtics.com/shop,NBAStore.com, adidas.com, the ProShop at the TD Garden, the NBA Store in New York as well as adidas retail locations. They will be worn by the Celtics players during pre-game warm-ups before the Celtics-Knicks playoff games beginning with game 1 in New York on April 20th. The team will also wear a special uniform patch throughout the playoffs as a tribute to those affected by the tragedy and those who acted heroically in support of those victims.

In addition, the team is providing ticketholders for the cancelled April16 game vs the Indiana Pacers the opportunity to donate their refund for that game to the One Fund and the Shamrock Foundation will donate all 50/50 in-game raffle proceeds during home playoff games to the One Fund. Celtics fans may also make direct donations throughwww.celticsfoundation.org. 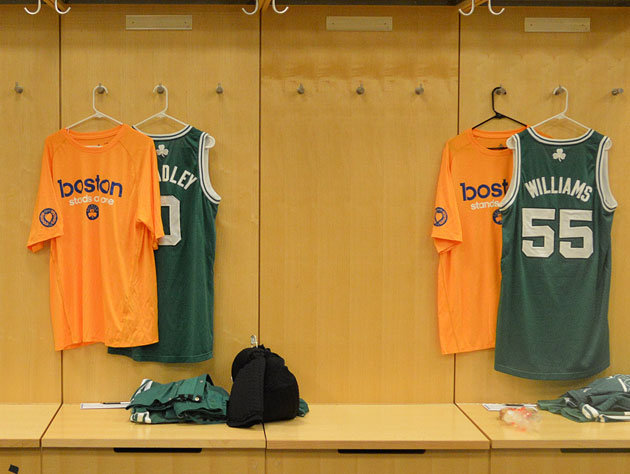