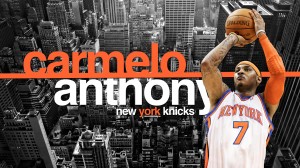 Looking at the amount of players New York gave up, it is apparent they really wanted Melo. Giving up Felton who has been was terrific so far this season, Chandler who averaged over 16 points per game, and Gallinari a budding star has led to a lot of doubters towards the Knicks side of the deal. Here is why I think it was a great move for New York.

1) NY has the biggest stage in sports: Carmelo already has made himself into a very big name athlete by winning the NCAA championship  and now is going to be linked with  A-rod and Jay-Z. Melo is a basketball star and brings fans to Madison Square Garden. Likewise I think he draws a lot of positive attention to the knickerbockers and the Big Apple.

2) New York has a chance to win in the future and now:

I really think that Chauncey Billups is the major component to this trade and why the Knicks will have success this year as well as going forward.  Chauncey is proven winner with big game experience in Detroit as well as Denver. Similarly, I think Billups will fit nicely with this team and running Dantonio’s offense. He is good at incorporating his teammates and probably a better shooter than Felton. The other nice thing for the Knicks is that Billups contract will expire in 2012 which is also the same time Chris Paul and Derron Williams will be free agents.  (Note: Derron Williams was traded to New Jersey and likely signs an extension).  Either way, New York will have cap room in 2012 and can add role players or try and do what Miami did with 3 superstars.

The Knicks are currently ranked 6th in the East but should finish higher.  The way I look at it right now, Boston and Miami are the only teams in the East that I would rank higher. Pic Via