During the last lap of the Nationwide race at Daytona, there was a horrific crash as drivers were jockeying for position.  The leader Regan Smith was hit from behind and began to spin out, which caused this massive wreck.  Multiple cars were completely destroyed, and part of rookie Kyle Larson’s car actually pierced the fencing.

Nascar is going through and blocking videos of the wreck on YouTube, but we managed to find one from the stands that isn’t blocked and that is at the top of this post.  The video is courtesy of @random_sports (originally shot by Tyler Anderson).

Medical attention was required for people in the stands, and it is unknown how many of the spectators or drivers were injured.  Hopefully everyone is okay.

Tony Stewart ended up avoiding the wreck to win the race.

That tire landed 9 rows up in Daytona grandstands. A fan was also injured 11 rows deep in upper deck. Saw 6-8 people taken off on stretchers

15 spectators transported to area hospitals; 1 on the way to surgery with head trauma; no further information at this time.

The latest update is that 17 fans are at local hospitals; two of them with "major" injuries. No further details available. 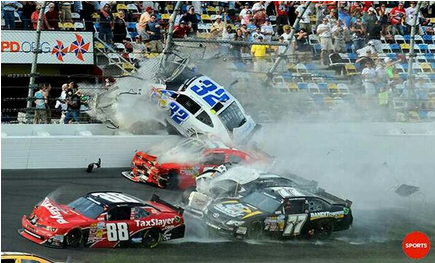 13 drivers involved in crash that sent a reported 15 fans to hospital at Daytona.

Just horrible that this had to happen.

James Franco at Daytona 500: “Drivers and Danica…start your engines”