The Detroit Tigers caught an awfully lucky break during Game 2 of the ALDS.

During the 8th inning with the Tigers up 1-0, Austin Jackson hit a single to Nick Swisher in the outfield. Swisher picked up the ball, threw it to second base where Robinson Cano tagged out Omar Infante. Unfortunately, umpire Jeff Nelson was blocked to the base by Infante and called him safe, continuing the inning.

The Tigers went on to score two additional runs when Avisail Cabrera hit a bloop single to score Infante and then Miguel Cabrera went on to drive in a Jackson.  Nelson’s call would have ended the inning and kept the score at 1-0. The finale score was 3-0.

Joe Girardi was ejected for arguing the call. He voiced his opinion about the play following the game.

“These guys are under a tremendous amount of pressure. It’s a tough call for him because the tag is underneath and it’s hard for him to see. It takes more time for me to argue and get upset than to get the call right. There’s just too much at stake.

“We play 235 days to get to this point. We had two calls go against us. We lost a game by one run [in Game 1], and I’m not saying if Robbie Cano is safe last night then it changes the game. The outcome still might be the same, but I’d like to take my chances.

This is also the same guy that said during the ALCS three years ago that having instant replay for all plays, would slow down the game. 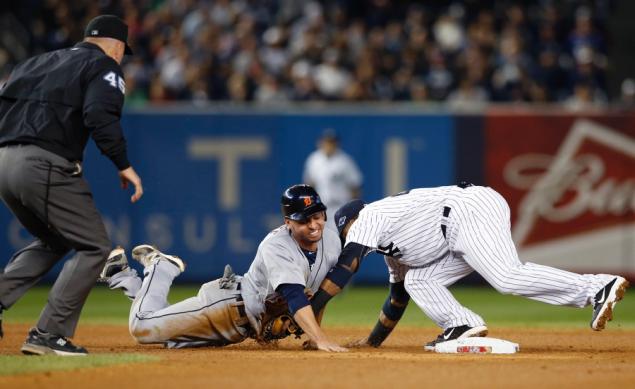