Who the Tigers should sign to replace Victor Martinez

Detroit Tigers slugger Victor Martinez is likely done for the season after tearing his ACL, leaving a huge hole in the middle of Detroit’s lineup. The Tigers likely won’t be able to replace Martinez’s production from 2011, when he hit .330 with 103 RBIs.

The Tigers have some options left on the table here, as V-Mart’s injury happened early enough in the off-season that there are still valuable players left unsigned.

So who should the Tigers be looking at to replace their injured slugger?

Let’s look at the top free agents left and what makes the most sense for Detroit: 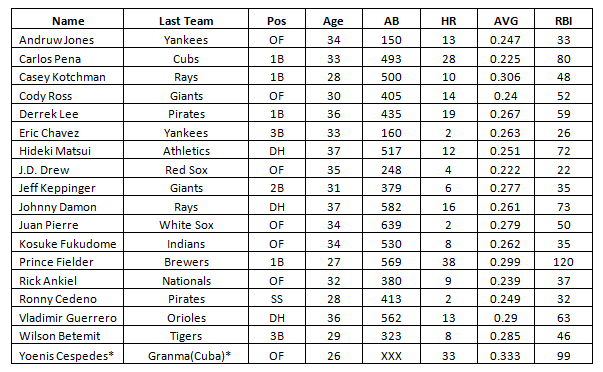 The Tigers could sign a DH/1B to DH and give Miguel Cabrera a breather once in a while or they could target an OF and move Delmon Young back to DH to protect his knees. Signing a 2B to replace Carlos Guillen/Will Rhymes would make sense, as well as a SS to move Johnny Peralta to 3B, leaving Brandon Inge to play spot duty.

Dombrowski did seem to shoot down the possibility that Cabrera could move from first base to third, with another first baseman joining the team, saying “We’re not looking at that as a full-time option.”

The biggest name on the board is of course 1B Prince Fielder, who is the son the former Tigers star 1B Cecil Fielder. This would be a homecoming for Prince, as he spent years running around the old Tiger Stadium clubhouse watching his dad play.

Prince is looking for a long-term deal for superstar money, which Detroit might not be able to offer. In regards to who they are targeting, Tigers’ GM Dave Dombrowski said “Most likely, I would say it’s short term. But I don’t know that for sure. Depends on what position somebody plays and who they are.”

It will be equally as challenging to find a clubhouse presence such as Martinez, who excelled at keeping the team loose and happy. Johnny Damon was certainly a great presence and leader during his one year in Detroit, and it would make sense to bring him back.  Damon hit for 0.261 and 73 RBIs last year for Tampa Bay.

Cuba’s Yoenis Cespedes is another potential option. Cespedes is an all-around player who could take over left field. This would improve the Tigers defensively in left and provide the necessary protection for Miguel Cabrera so teams don’t pitch around him while Martinez is out.

It would make the most sense to bring in another outfielder that adds defense and a have Young DH.  Cespedes has struggled in winter ball, but he hasn’t seen game action for a while, and teams remain high on him.  He is younger than the other FA’s out there and could build a formidable OF of the future with Brennen Boesch and Austin Jackson.

Other potential short-term replacements could be Rick Ankiel, Hideki Matsui, or Vladimir Guerrero, who would all be decent, cheaper options for a one-year deal.