2010 has been a unique year in baseball. It may be considered the most dominating pitching year in the history of the sport. Consider this, there has been a total of 16 perfect games in over 100 years and in a short 20 day span this year, two more and nearly a third were added. It started with Dallas Braden’s 109 pitch, 4 strikeout game against the Tampa Bay Rays on May 9th. Twenty days later in Philadelphia, Phillies pitcher Roy Halladay’s 115 pitch, 9 strikeout game came against the Marlins.

The nearly third perfect game, came 5 days later in Detroit and will have people talking for years to come.

Starting Pitcher Armando Gallarraga of the Detroit Tigers only needs one more out for the third perfect game of the year. Tiger’s first baseman Miguel Cabrera gets a ground ball and flips to Gallarraga covering at first. With the ball secured in his glove and standing on first base before the runner reaches the base, umpire Jim Joyce calls the runner safe. It was a very painful moment. The runner was clearly out. I was baffled at the moment he was called safe. Everyone was frustrated with Jim Joyce, other than maybe the pitcher Gallaraga. Here is how he reacted to Joyce during the post game interview.

“He really felt bad. He probably felt more bad than me. And nobody’s perfect and we’ll all human. I really give that guy a lot of credit to tell me, ‘I need to talk to you. ” You don’t see an umpire after the game come out and say, ‘Hey, let me tell you I’m sorry, I made a mistake. That don’t happen.”

Following this incident, Jim Leyland, Tiger’s manager had Armando Gallaraga give Joyce the lineup card the following days game (pictured). Gallaraga saved that MLB a lot of trouble that might have endured if fans and players began questioning the integrity of umpires and not understanding why baseball is the only sport that doesn’t use instant replay. This blown call will be the highlight of the 2010 season but not only for what went wrong, but how Gallaraga responded to umpire Joyce’s call in a positive light. 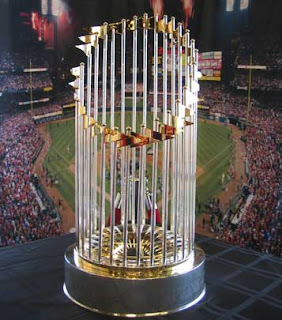