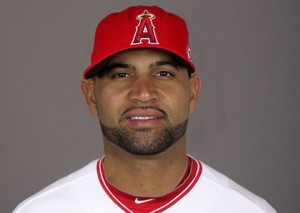 It seemed all along that the Miami Marlins were going to catch the big fish in the free agent crop by signing Albert Pujols to a 10-year, $220-million offer. However, the Marlins refused to give Pujols his desired no-trade clause, so he moved to the next suitor.

According to Tim Brown of Yahoo sports, Albert Pujols is going to the Los Angeles Angels of Anaheim for a 10-year contract worth $250-260 million.

This is obviously a huge get for the Angels for many reasons. Although they currently have first baseman’s Mark Trumbo and Kendrys Morales on their roster, Pujols is arguably the best first baseman in the game and gives them flexibility in the lineup.

After the Marlins failed to real in Pujols, it appeared he would be returning to St. Louis and finish out his Hall of Fame career. The Cardinals reportedly offered Pujols a 9 year deal at over 200 million. Pujols’ contract with the Angels will be the second-highest in major league history, behind Alex Rodriguez’s 10-year, $275 million deal.