Why the Tigers can win the pennant 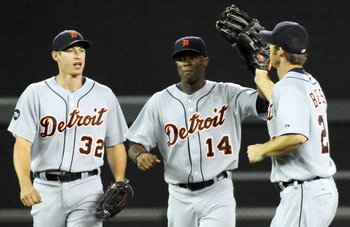 Detroit is sitting pretty 5-1/2 games up after a sweep of the division rival Indians and taking the next two games against Tampa Bay.  At twelve games over .500 (70-58), the Tigers are playing excellent baseball as of late, enough so that it should carry them to the playoffs. They’re doing all the small things that win games, like driving in runners with two outs and closing games with unbelievable defensive plays.

In the Tigers game against Cleveland, Austin Jackson became only the 7th player in MLB history to end a game on a centerfielder to catcher put-out. This preserved Papa Grande’s save streak now at 37. Additionally, reliever Phil Coke delivered a 51 pitches save to preserve victory against Tampa last night. This was the most pitches in less than 3 innings to register since Jim Mecir threw 51 for A’s 9/6/2000.

Last season, San Fransisco didn’t exactly dominate the regular season and only won the NL West by two games over San Diego. They did just enough to win the division and they had the necessary pieces to make a run through the playoffs.  Some of the driving force for the Giants World Series title were their pitching staff, which included a formidable ace, Tim Lincecum and two other solid starters.  They also made some late season acquisitions that positively impacted their offense for the remainder of the season. Based on the similarities between the Tigers and last year’s Giants, I think the Tigers can do something similar and win it all.

Detroit clearly has the ace pitcher in Justin Verlander and one of the best hitters in Miguel Cabrera. Having someone as reliable as Verlander during the playoffs is a confidence booster for the team as they can almost always count on victory every time he pitches. He stepped up in a game 7 situation and delivered when it mattered most for Detroit. Likewise, Cabrera’s presence in the lineup gives Detroit the power to drive in runners on base and an intimidator in the middle of the line up. Finally, when Detroit holds a lead going into late innings, they can count on their solid bullpen especially the big potato to close out the game.

It all revolves around the managerial decision making of Jim Leyland, which has gotten a lot of criticism this year. I will only say that the guy knows how to win and has already got Detroit to the World Series back in 2006 with far less skill than this years team possesses. I trust the skipper can make timely decisions in the playoffs and get this team by AL powerhouses like Boston and New York.