No October This Year (But The Future Is Bright For Detroit) - 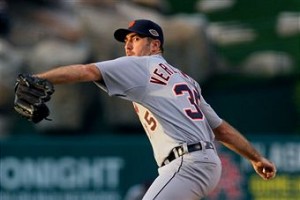 What first seemed like a very, very bad game to the Detroit Tigers (7/24/10) against the Toronto Blue Jays, may actually have been a good thing in disguise. Starting right fielder Magglio Ordonez left the game with a fractured foot and second baseman Carlos Guilens also left due to a strained calf. Ordonez’s injury came while sliding into home plate. These two injuries, added to the other ones of Inge and Zumaya, will likely end the chance for the Tiger’s to make a trip into October, but will hopefully guide the Tiger’s toward the future.
Before Magglo’s injury, the race for the AL Central was wide open between the Twins and White Sox. It could have easily fallen in the Tiger’s favor with a possible big acquisition like starting pitcher Dan Haren. Getting Haren, however, would have cost the Tiger’s it’s best pitching prospects, Jacob Turner and Andrew Oliver. This trade would have set us up for this year, but it wouldn’t be a certainty for the future. Turner and Oliver could be just as valuable next season and might just be better in the long haul as Haren. Had we traded for Haren, the Tiger’s would still have many other positions to be filled for this year’s team to be in contention for the World Series. Still needing pitchers, a shortstop, third baseman due to Brandon Inge’s injury, a DH, all the while giving up more players in the minor league system. So in the end, the Tiger’s shouldn’t be trading this season and stick with the guys they have.
Detroit has more money to spend in the offseason than any other ball club, except the obvious, Yankees. They loose the ugly contracts of Jeremy Bondermen-12.5 M, Dontrelle Willis-12M, Nate Robertson-10M, Brandon Inge-7M and Johnny Damon- 8M. Magglio Ordonez was scheduled in 2011 for fifteen million dollars if he reached 135 starts or 540 plate appearances. He will not reach either of those marks due to his recent injury and gives the Tiger’s quite a bit of extra money to sign some very good players for 2011. Here’s some possibilities for Detroit.
Carl Crawford should be the #1 guy considered. He could be locked up by the Tiger’s on day one that he’s available. He may be hard to keep away from the Bronx, but this speedster is exactly what the team needs at the top of the lineup. This is a guy that can hit for average, steal 40 bases and brings an excellent glove to the team. An outfield of Crawford-Jackson-Boesch would be a fine group for years to come.

The Tiger’s would then need to find a starting pitcher and they might just be able to get the guy that everyone wants: Cliff Lee. Lee is a powerful left-hander, who is considered by many, as the best pitcher in the game. Lee would bring an amazing 1-2 punch with Justin Verlander at the top of the rotation. He is exactly what the team needs: a starting left handed pitcher with big game experience. Josh Beckett is another possibility for a starter.