East-Boston Red Soxs-They have been having trouble with the injury bug all season. Dustin Pedroia is back at second base and performing well. Adrian Gonzalez has been the MVP of the AL so far and looking like he will continue on this pace. I like Boston to get New York for the division because of the bullpen and eventually a healthy pitching unit.

Detroit Tigers- Detroit is currently .5 ahead of the Cleveland Indians. The Tigers have been led all year by the tremendous pitching combination of Justin Verlander’s ten wins, and Max Scherzer’s nine wins. If Detroit can find any starting pitching outside of these two, that would be a huge addition. The surprise of this team has to be the play of Alex Avila and Jhonny Peralta. Similarly, a big free agent pick up in Victor Martinez gives Detroit a dangerous lineup in addition to Miguel Cabrera.

West- Texas Rangers- There’s a good chance that this is the worst division in baseball. Texas is currently leading at 3 games over .500 over the L.A. Angels. I’m picking Texas because of their lineup and the experience they gained from last season. However, it wouldn’t surprise me Seattle and King Felix start to creep up and take this.

Wild Card- Like many other years the battle for the wild card is between New York and Boston. If Boston takes the division, New York will likely get the wild card as they have the second best record in the majors at this point.

East- Philadelphia Phillies– Philadelphia has to be everyone’s favorite team to win the World Series. Their four headed monster (Hamels, Holloday, Lee, and Oswalt) should breeze through the regular season and give fits to every opponent they face. Because of their pitching staff, they are my team to win the W.S.

Central- St. Louis Cardinals- There’s a chance that Milwaukee, which currently has the best record in the division wins out, but I like the Cardinals. St. Louis has had a lackluster July and stands only 3 games behind. I would expect any team managed by Tony Larossa to have a better finish after playing so poorly.  Having Big Albert is especially nice because he’s the best player in baseball.

West- San Francisco Giants- The defending World Series champs took a major hit losing Buster Posey for the year. They are 2 games ahead of Arizona and there is a strong possibility they will try and swing a deal to bring in a high profile hitter. Their best hitter for the year has been Aubrey Huff which is not saying much. Look for this team to make some moves and position themselves nicely for a playoff push.

Wild Card- Atlanta Braves- The Braves are currently 10 games over .500 and have been playing good baseball. They have a good young pitching staff with Jair Jurjens and Tommy Hanson. If they can get Jayson Hayward hitting for a decent average he can carry this entire lineup. 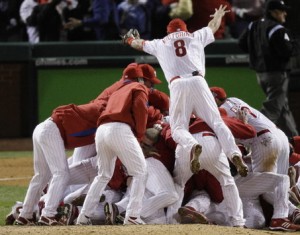 Agree or disagree? Let’s hear it. Make a prediction and you’ll instantly be in the running for one of these great Friedman-Family-Baseball prizes as quoted by the one and only  uncle Rich.

“World Series front row seats, private tour of the Hall of Fame, dinner with a baseball coach, visit to the real Field of Dreams, interview with Ted Williams (head only) about his relationship with Joe D. , ball from Derek Jeter’s 3,000 hit, breakfast with our own “Big Papi”, all-expense paid visit to Sarasota, FL for a whine & dine with Grandma Enid.”