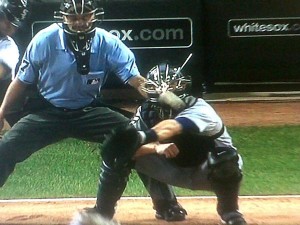 A game in which Detroit won its 11th consecutive and Justin Verlander recorded his 23rd victory, a foul tip took the spotlight.

During the 8th inning of Tuesday night’s Detroit Tigers vs. Chicago White Sox games, Tigers catcher Alex Avila took a foul ball off the mask. It was the second foul ball that hit him during A.J. Pierzynski’s at-bat.

The 24 year old All Star catcher has been a pleasant surprise this year for Detroit batting .300 with 18 home runs and 75 batted in. He has had issues with getting pegged by foul balls this season, to the point where skipper Jim Leyland says that, “Avila probably gets hit more than any catcher I’ve ever seen – I’ve never seen anything like it.”

You can check this one off a list of things you’ve never seen before.