Philadelphia Flyers forward Wayne Simmonds started off the lockout by playing in Germany, but soon moved on to play in the Czech Republic for Liberec of the Czech Extraliga.  During a game against Chomutov, after a fight/scrum that Simmonds was involved in, the crowd began to chant “opice.”  Opice, when translated to English, means monkey.

This unfortunately is not the first time that Simmonds has had to deal with these disgusting antics.  When he was playing in an exhibition game in London, Ontario last year, a fan threw a banana peel at him during his shootout attempt.  Thankfully, Simmonds is a much bigger person than the fans that attend hockey games and says that he lets this stuff “roll off his back” and he “tries not to think about it.”

It’s a shame that in this day and age that people can be so thoughtless and brutal, and if you’re up for, it you can see the video of what happened here.

A letter of apology was sent on Monday directly to Wayne Simmonds from the Chomutov Club. 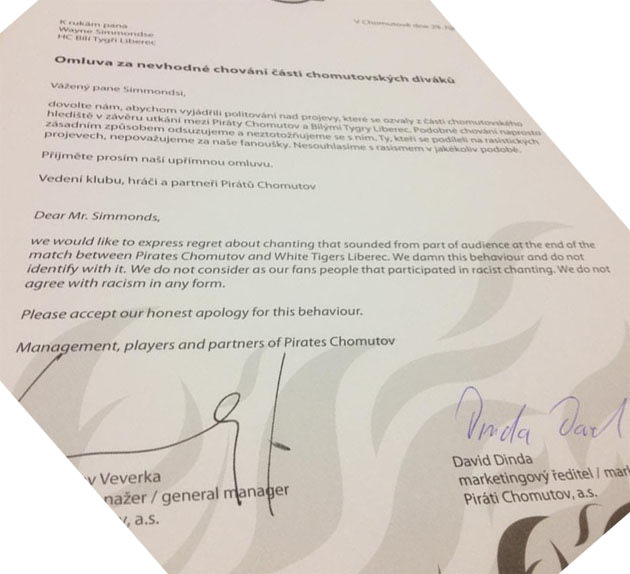 Both teams released statements on their websites regarding the incident, and here is what Chomutov had to say:

“We are disgusted by the behavior of a group of spectators who greatly damaged the reputation of the club. We would like to deeply apologize to the players and Mr. Simmonds,” said Chomutov Marketing Director David Dinda.

“It was embarrassing, pathetic and small. I ask these people to not attend Chomutov hockey games. In fans like them we are not interested in. We’ll do our best to find people who are the originators of this act and prevent them entry to the stadium.” said Chomutov GM Jaroslav Veverka.

I hope that incidents like this will stop.  It is a black eye for the sport of hockey, and more importantly is completely an inhumane thing to do to someone.  Whether they’re playing for your team or not, using someone’s race or religion to insult them is pathetic and low.