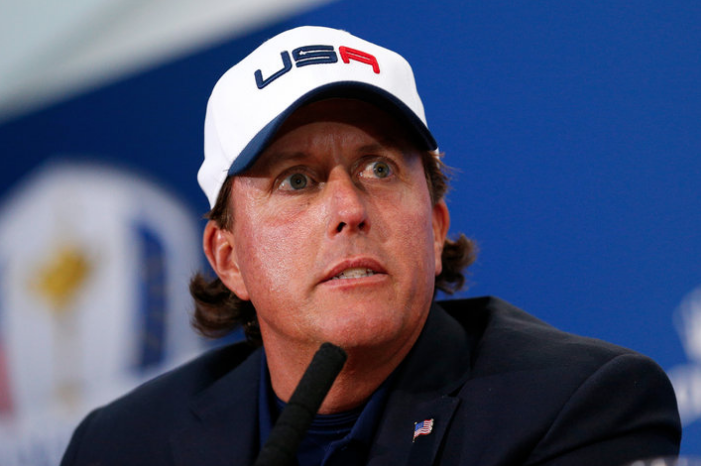 It appears that Phil Mickelson is still not over getting “benched” for all day on Saturday of the Ryder Cup. Phil Mickelson hadn’t sat out a full day in his 20-year Ryder Cup career and he had some things to say about it during the awkward Team USA Press Conference.

The most notable critique was the overall Team USA deviation from the 2008 “pod” strategy put in place by then-captain Paul Azinger.

After firing the shots comparing this year to Azinger’s captaincy, Mickelson was asked if he or anyone was consulted on any decisions this week and gave a curt answer. He was not happy.

Bradley was asked about the benching, but only after Mickelson said “Keegan, why don’t you take that one, I’ve probably said enough.” Bradley wasn’t thrilled, saying he was “bummed” about the move that had him sit out an entire day.

Watson, who was sitting just down the line, responded to Phil “I had a different philosophy being a captain of this team. You know, it takes 12 players to win. It’s not pods. It’s 12 players. And I felt, I based my decisions on, yes, I did talk to the players, but my vice captains were very instrumental in making decisions as to whom to pair with.” Watson added, “He has a difference of opinion. That’s okay.”

Keep in mind, this was going on as the entire team and Tom Watson were all sitting together in a row. I can’t imagine Tom Watson and Phil will be speaking much after this.

How do the players feel about Capt. Watson? One team member just texted me: “Although he’s rarely right, he’s never in doubt!”