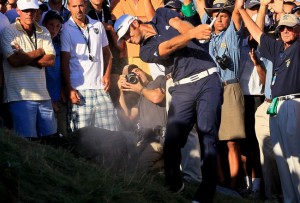 On the last day of this year’s PGA Championships the final pairing was brutally painful to watch. Nick Watney had a three shot lead into the final day, but double bogeyed the first and tripled the par three seventh, finishing tied for eighteenth. His playmate for the round, Dustin Johnson, had an even more painful round to deal with. Johnson started the final round tied for fourth place and witnessed firsthand the slumping leader Watney. Johnson capitalized, moving closer to the top of the scoreboard, finally birdying sixteen and seventeen and taking the lead by one. Only needing a par on the 18th, Johnson hit his drive into the crowd and not knowing he was in a sand trap, placed his club behind the ball, touching the sand and was called for a grounding penalty. Dustin Johnson missed the putt on the eighteenth that, at the time, everyone thought was to win the PGA Championship. It was a very sad moment for a guy who blew this year’s U.S. Open and has yet to win a major tournament. Johnson ended the tournament tied for fifth with Martin Kaymer edging out Bubba Watson in the playoff. Johnson’s penalty shot, though, will be what this year’s PGA Championship will be known for.
In this article:Golf, Golf Mayhem