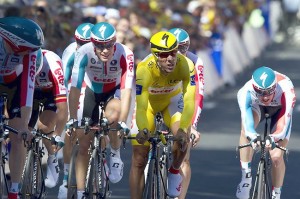 The Tour De France started yesterday. How do I know that? Because my dad who never watches T.V. was sitting and watching a bike race on T.V. Here’s the truth about my knowledge of the Tour de France; I know who Lance Armstrong is and I know it ends in Paris. Period. I figured, if I’m going to be home for the weekend and sit with my dad watching the tour, I might as well know something about it. Here’s what I found out.

It’s not just about Lance Armstrong, funny helmets, and colorful jerseys. The Tour has been going on since 1903 (by my calculations that’s 108 years of racing). It features 22 different teams, each with 9 riders. The race totals 3430 kilometers (2,131 miles) in distance in a grueling 21 days (2 resting days). There are many different stages including team time trials, individual time trials, flat, mountain and intermediate stages. Each team is sponsored by a different company, including one of the U.S. teams which is sponsored by Radio Shack. Teams are made up of sprinters, climbers, and domestiques (who serve and sacrifice for the team leader).

Yellow Jersey: The overall leader at each stage is awarded the yellow jersey or the maillot jaune. This is the most coveted jersey of the Tour.  It represents the overall leader of the race who has completed the course in the lowest aggregate time. Last year Alberto Contador (Spain) finished the tour 39 seconds ahead of second place finisher Andy Schleck of Luxembourg. Both cyclists are heavily favored this year.

Green Jersey: Is awarded to the best sprinter in the tour or called the maillot vert. It is determined by a point system that is shown below. Each different stage of the race has a different point rating.

Polka dot Jersey: Is the jersey worn by the “King of the Mountains.” This is awarded to the best climber in the race. The jersey is white with red dots. It is also called the maillot à pois rouges.