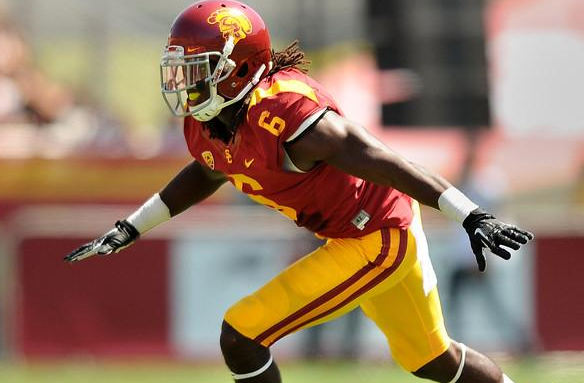 USC named cornerback Josh Shaw it’s captain on Saturday. It’s no wonder that they gave him the honor, as later that night, Shaw, a fifth-year senior, injured himself rescuing his nephew from a swimming pool.

While attending a family social function at his cousin’s apartment in his hometown of Palmdale, Shaw looked on from a second floor balcony to the pool below and saw his 7-year-old nephew, who cannot swim, in distress without help nearby.  Shaw instinctively leaped off the balcony, landing painfully on the concrete below.He was able to crawl into the pool and ushered his nephew to safety.  Despite the intense pain in his legs, he was then able to grab the ladder and lift himself out of the pool with his upper body.Shaw’s nephew Carter is a bit “traumatized,” but physically okay.  Shaw was taken to the hospital and subsequently diagnosed with two high ankle sprains, which will sideline him indefinitely.“I would do it again for whatever kid it was, it did not have to be my nephew,” Shaw said today.  “My ankles really hurt, but I am lucky to be surrounded by the best trainers and doctors in the world.  I am taking my rehab one day at a time, and I hope to be back on the field as soon as possible.”Said head coach Steve Sarkisian: “That was a heroic act by Josh, putting his personal safety aside. But that’s the kind of person he is. It is unfortunate that he’ll be sidelined for a while and we will miss his leadership and play, but I know he’ll be working hard to get back on the field as soon as possible.”