Byron Moore, a redshirt junior defensive back, took to his Twitter page to joke about the current state of Tennessee coaching search.

It’s never a good sign when one of the few people that want to come and coach your school is someone who is currently on the team.  Obviously it’s just a joke, but last night on Twitter, #TurnedDownTennessee was trending, further showing how much of a joke the coaching search has become.

If we can't get a damn coach out of Louisville then I'm gonna freak the hell out! This is Tennessee not MTSU! I'm sick of this crap!

Former Tennessee quarterback Erik Ainge, who now has a radio show, openly criticized his alma mater and he does have a good point.  You know Tennessee is in a poor state as a program, when the head coach of Louisville is turning you down.  The last two hires Tennessee had to replace Philip Fulmer were awful, and they need to find someone that will actually do a good job.  This program has been set back at least four years because of their bad hires.

You also know your program his struggling, when a craigslist ad is created by the fans. 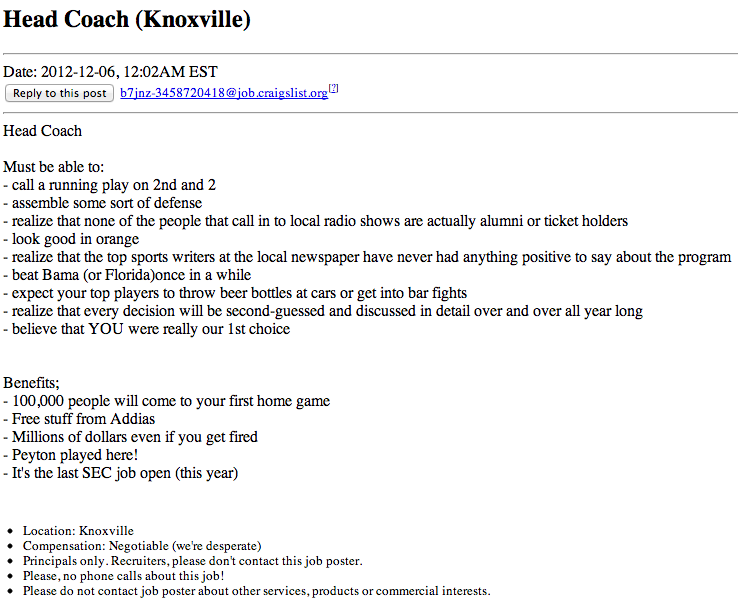 I feel bad for Tennessee Volunteer fans that their coaching search has fallen apart and become such a huge joke. It’s never fun when your football team falls apart, but this is by far one of the funniest coaching searches I’ve ever seen in my life.  This craigslist ad is literally perfect and whoever wrote it has a fantastic sense of humor, even with their favorite team in such a dark place.