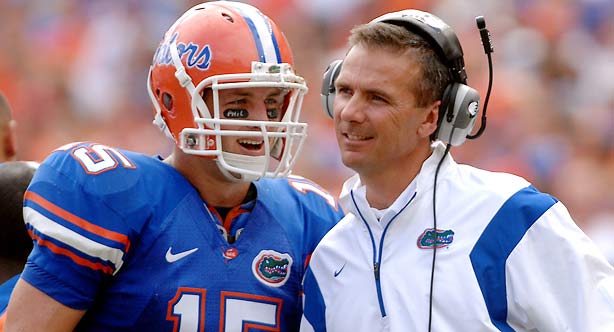 Ohio State head coach Urban Meyer continues to be in Tim Tebow’s corner and doesn’t understand why he is out of the NFL. Perhaps Urban doesn’t understand throwing mechanics or the giant media circus that follows Tebow around and causes distractions.

Here are his full comments from NFL.com:

“I still don’t get that part of it,” Meyer said Tuesday at Big Ten Media Days. “He’s the second-most efficient passer ever to play college football.”

“He had really good personnel around him (at Florida) and we utilized his skill very well,” Meyer said. “I think in a traditional setting, it is difficult, but there’s a lot of non-traditional offenses now in the NFL.”

As for what NFL teams might be the perfect Tebow fit, Meyer said he doesn’t “get in people’s business.” He does, however, wish Tebow the very best and is holding out hope that he gets another NFL opportunity.

“He’ll be successful in whatever he does, but he’s such a good player,” Meyer said. “I just wish it would work out for him.”